The Devil All The Time Movie: Review, Plot, Cast, Trailer, Everything You Need to Know About Tom Holland, Robert Pattinson’s Netflix Film 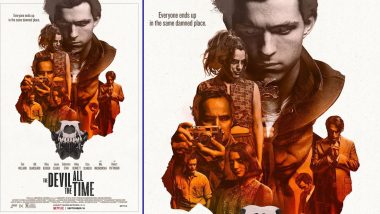 The Devil All the Time Movie Poster (Photo Credits: Twitter)

The intriguing trailer of The Devil All the Time, starring Tom Holland and Robert Pattinson has impressed the audiences already and the much-awaited film is all set to premiere on Netflix globally on September 16. Reviews of this psychological thriller are out and so far it has received a mixed response from the critics. Helmed by Antonio Campos, the Netflix Orignal is an official adaptation of Donald Ray Pollock’s debut novel of the same name. 2020 has been a year of Netflix original whether it was Chris Hemsworth, Randeep Hooda's Extraction that set records of being the most-streamed Netflix film across the globe or call it Charlize Theron's The Old Guard which was welcomed by the viewers with open arms. The Devil All the Time Movie Review: Tom Holland and Robert Pattinson’s Film Receives Mixed Response From Critics

Set in the timeline between World War II and the Vietnam war in Knockemstiff, Ohio, and its neighbouring backwoods, evil characters – an unholy preacher (Robert Pattinson), twisted couple (Jason Clarke and Riley Keough), and a crooked sheriff (Sebastian Stan) – converge around young Arvin Russell (Tom Holland) as he fights the corrupt forces that is a big threat to his family

Here is the Official Trailer of The Devil All the Time

The reviews of Tom Holland and Robert Pattinson's Netflix film are not out yet in India. Latestly will update you with The Devil All the Time movie review soon. So stay tuned!

(The above story first appeared on LatestLY on Sep 15, 2020 03:53 PM IST. For more news and updates on politics, world, sports, entertainment and lifestyle, log on to our website latestly.com).