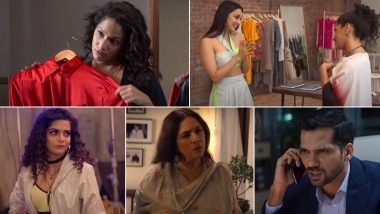 Fashion designer Masaba Gupta's fictional series based on her own life is all set to hit the streaming giant Netflix from 28 August 2020. Earlier the makers had teased fans with the show's teaser and now the official trailer of Masaba Masaba is out. This show is unique in its own way as it will take the audience on a tour that highlights the never touched upon life of an Indian weaver. There is fashion, drama, love, betrayal and more in this Netflix series. In a nutshell, viewers will get to see the sweet as well as bitter part of Masaba's so-called elite life. Masaba Masaba Teaser: Masaba Gupta's Netflix Series' Trailer To Release On August 14 (Watch Video).

The trailer starts with Masaba Gupta as a teenager dreaming to make a sensational mark in the style industry. Cut straight to her designer life, we get to see how she struggles on a daily basis with the clients and it's not that glamorous as it looks. Well, that's not it, as the trailer also shows Gupta's life crumbling when a blind item and many negative news about her spread like wildfire on the internet. However, in the end, she owns her life like a boss. Masaba Gupta Dating Aditi Rao Hydari's Ex-Husband Satyadeep Misra?

Check Out the Trailer Of Masaba Masaba Below:

Masaba Masaba also sees Neena Gupta (her real-life maa) playing the role of her reel mother. We also get a glimpse of sassy Kiara Advani as Masaba's client. Well, all in all, the trailer looks entertaining and shows us the reality of the fashion showbiz in today's time. This series is directed by Sonam Nair and produced by Ashvini Yardi. Stay tuned!

(The above story first appeared on LatestLY on Aug 14, 2020 12:45 PM IST. For more news and updates on politics, world, sports, entertainment and lifestyle, log on to our website latestly.com).