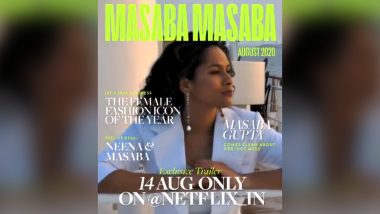 Indian fashion designer Masaba Gupta is coming up with her own unique fictional series called as Masaba Masaba. It will be streamed on Netflix and is very much the part of the new line up that the streaming platform recently announced. The trailer of the series that will be based on the theme of love, life, career and more will drop on Friday (14 August 2020) on the internet. However, she recently gave a glimpse of it through a short teaser. Netflix India Announces 17 Original Projects Including Janhvi Kapoor's 'The Kargil Girl', Sanjay Dutt's 'Torbaaz' And It's Time To Store Some Popcorn at Home! (Watch Video).

In the new promo, we can see a magazine like layout. Masaba is seen chilling and posing on a lavish yacht in the mid of an ocean. She looks stunning and bossy in an all-white themed attire and accessories. The 'magazine' has some of the labels like 'The female fashion icon of the year,' 'Masaba Gupta comes clean about her hot mess,' Reel vs Real: Neena & Masaba,' that give away nothing about the plot but look interesting! Here's the promo.

Masaba Masaba will also have her mother and actress Neena Gupta in one of the episodes. She has also hinted about the same in one of those labels above. Apart from her, actress Kiara Advani is also making a cameo in the series where she will reportedly play a self-obsessed version of herself visiting Masaba's store. Stay tuned for more updates!

(The above story first appeared on LatestLY on Aug 13, 2020 01:03 PM IST. For more news and updates on politics, world, sports, entertainment and lifestyle, log on to our website latestly.com).