Mirzapur 2 New Trailer Is All About Revenge and Power Multifold! (Watch Video)

In the new trailer, Ali Fazal and Shweta Tripathi's characters show a strong presence and are in no mood to bow down. 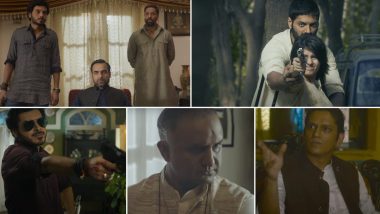 The much awaited Mirzapur 2 trailer is here finally! The demand for the same has been on and on for a while. After teasing the netizens with dates and glimpses, the trailer is here and it could not be more interesting. By now the fans know that this season is all about revenge. The characters of the series are all set to taken on each other with their vested interests. Mirzapur 2 Trailer Funny Memes Go Crazy Viral! Fans Flood Twitter With Hilarious Jokes As They Eagerly Wait for the Amazon Prime Hit Series.

In the new trailer, Ali Fazal and Shweta Tripathi's characters show a strong presence and are in no mood to bow down. Pankaj Tripathi and Divyendu Sharma's roles are just like before, bold and manipulative. We also see Vijay Varma in the cast of the season 2. The video promises a lot of violence, emotions and race for power and this is exactly what the fans must have expected. Check out the trailer below.

The cast of first season included Pankaj Tripathi, Divyendu Sharma, Ali Fazal, Vikrant Massey, Shweta Tripathi, Shriya Pilgaonkar, Rasika Dugal, Harshita Gaur and Kulbhushan Kharbanda. The fans will definitely miss Shriya and Vikrant in the new one! How did you like the trailer? Do let us know in the comments section below.

(The above story first appeared on LatestLY on Oct 06, 2020 02:13 PM IST. For more news and updates on politics, world, sports, entertainment and lifestyle, log on to our website latestly.com).