Minutes after the trailer was out; fans have flood Twitter timeline with funny memes and jokes as they eagerly wait to find out what happens in the lives of the onscreen characters of Pankaj Tripathi, Ali Fazal, Divyenndu and Shweta Tripathi Sharma. 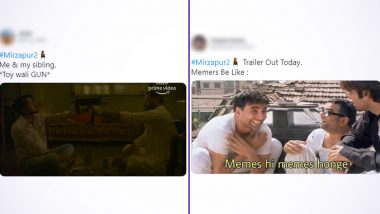 The wait for the second season of Amazon Prime web series, Mirzapur has been a long one. But it finally seems to end as Mirzapur2 trailer is out today, October 6. As speculated, the latest season is going to take the bloody battle for power and revenge to another level. Minutes after the trailer was out; fans have flood Twitter timeline with funny memes and jokes as they eagerly wait to find out what happens in the lives of the onscreen characters of Pankaj Tripathi, Ali Fazal, Divyenndu and Shweta Tripathi Sharma. The jokes are hilarious AF, and it shows how followers are way too excited for the series to premiere on Amazon Prime Video on October 23, 2020. Latest Meme Templates For Free Download: From Hera Pheri Dialogues to Coffin Dance Video, These Meme Formats Will Help You Make Funny Jokes.

The season one of Mirzapur ended with a bloody showdown, leaving survivors Munna Tripathi (Divyenndu), Guddu (Ali Fazal) and Golu (Shweta Tripathi) to settle their scores among themselves. The trailer gives us a sneak peek as to how Munna is trying to set new rules for lording over Mirzapur, Guddu is out seeking revenge for his brother and fiancé’s death. Again, Golu sheds her 'good-girl' image to join the race to the throne. We don’t know how it is going to end, but surely can expect a lot of thrill-filled drama. Mirzapur 2 Poster: Ali Fazal and Shweta Tripathi's New Still Promises Cold Revenge!

Even before the trailer was out, fans took to social media to surface the internet with funny memes and jokes. So, when the trailer was finally released, it was quite obvious for Mirzapur 2 hilarious tweets to take over the timeline. The official Twitter handle of Amazon Prime also hinted that the upcoming trailer of the show would have a lot of meme template for fans to rejoice.

Mirzapur 2 Trailer is Out!

yes, the rumor is true, #Mirzapur2 trailer has a lot of meme templates

And the Memes Are Here!

Memers rushing to the #Mirzapur 2 trailer for a new templates. pic.twitter.com/KSAYbTiKGf

Me & my brother without a reason: pic.twitter.com/Wqhs9b2n7J

You Can't Miss That!

*When people criticize MSD for his age*

The viral memes and jokes show the excitement level of fans who now eagerly wait for the show to stream online. With the fight for the throne of Mirzapur getting more intense, will the rules change as well in the upcoming season? Well, we all will have to wait and watch the show to decide.

(The above story first appeared on LatestLY on Oct 06, 2020 01:55 PM IST. For more news and updates on politics, world, sports, entertainment and lifestyle, log on to our website latestly.com).