Mirzapur 2 Review: Too Many Characters and Plotlines Spoil the Fun in Pankaj Tripathi, Ali Fazal’s Web-Series 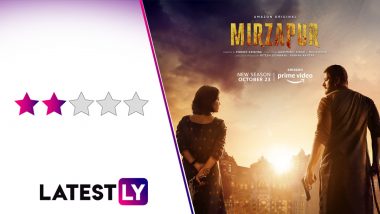 Mirzapur Season 2 Review: The guns are smoking once again in the lawless land of Mirzapur, and now, it's vengeance time! When the first season of Mirzapur came out on Amazon Prime, who knew then it would turn out to be such a sensation on an OTT platform, rivalled only by Netflix's Sacred Games. With a fantastic cast headed by Pankaj Tripathi, Ali Fazal, Vikrant Massey and Divyenndu Sharma, the first season worked well, and the dialogues turned out to be a cultural phenomenon of its own. Mirzapur 2 Is Arriving Soon! Makers Share Glimpse of Fan Frenzy Around The Amazon Prime Series (Watch Video).

But I was not very happy with the first season, despite its engaging characters and pace. I felt Mirzapur was aiming for over-sensationalism, when it came to violence, character depiction and even the colourful dialogues. I was also unhappy with how the female characters are portrayed, as well as its lame finale.

The new season of Mirzapur, created by Puneet Krishna and directed by Gurmmeet Singh, felt different, though. At least, the initial episodes made me feel so.

It gave the idea that Mirzapur 2 felt more plot-driven than character-driven. The dialogues, always the show's USP, continue to be darkly comedic and sensational, mostly those uttered by Pankaj Tripathi's Kaleen Bhaiya and Divyenndu Sharma's Munna. The violence continues to be brutal, from closeups of headshots to a vicious death involving a torch.

Watch the Trailer of Mirzapur 2:

Some might be unhappy about the new season not being as gallery-pleasing as the first. And they would be perfectly okay in thinking so. However, by keeping down its populist overtones, I thought Mirzapur 2 would leave a better impact.

And then, the fifth episode ended. Sadly, from hereon, I realised I was way off in my hopes, as Mirzapur 2 takes a mind-boggling tumble!

But before I share my disappointment, let's talk about what's happening in Mirzapur 2, after that shocking final episode of the last season. Kaleen Bhaiya (Tripathi), having redeemed his status quo as the baahubali of Mirzapur, now wants to tone down the recklessness of his infante terrible Munna (Divyendu Sharma) and prepare him for his throne. He also has to deal with consequences of Munna's horrific actions in the finale, while tackling new power equations threatening his kingdom. Like for example, Jaunpur's newly anointed don Sharad Shukla (Anjum Sharma), who wants to take over Mirzapur as revenge for his father's murder. Even if it means making a deal with the devil.

Sharad is not the only one planning revenge. Even Kaleen's wife Beena (Rasika Dugal) wants to avenge for what her depraved father-in-law Satyanand Tripathi (Kulbhushan Kharbanda) did to her in the last season's finale. Using her seductive charms and intelligence that is overlooked by the men in her family, she plans and executes her own chess moves.

While we are at revenge missions, how can we forget Guddu (Ali Fazal) and Golu (Shweta Tripathi Sharma)? Aggrieved over the deaths of their respective siblings, they are like injured lions licking the wounds and waiting to pounce on the hunters who destroyed their family. Guddu is left with a permanent limp and an hurt bravado, while Golu is steeling herself to take the place of the dead Bablu (Vikrant Massey).

And let's not forget Guddu and Bablu's father Ramakant Pandit (Rajesh Tailang) who wants to punish the killers of his son using the law. And in his mission, he gets an unexpected ally.

Mirzapur 2 is relishable when these revenge plots and powerplays criss-cross each other in an thrilling first half. There are quite a few tense-filled sequences that keep you thrilled in excitement. Like the sequence where Golu's hideout is discovered by a cop in the employ of Kaleen. Or that fantastic sequence when Guddu and Munna meet for the first time, after the events of the last season. Mirzapur 2 Trailer Funny Memes Go Crazy Viral! Fans Flood Twitter With Hilarious Jokes As They Eagerly Wait for the Amazon Prime Hit Series.

There are also brief interludes of black humour, and sly potshots on the state that is currently in the news for its law-n-order situation. Tell me, you didn't guffaw when you heard the slogan 'Bhay-Mukt UP'?

The trouble comes after the excellent fifth episode ends. With the infusion of more plotlines like the Bihar connection, Kaleen's political journey and a couple of romantic subplots, things begin to drag. Mirzapur 2 should also have been a couple of episodes shorter, saving us from the excruciating wait for Golu and Guddu to clash with Kaleen and Munna.

Sure, the new characters are fun to watch, be it a scene-stealing Vijay Verma in double role or an equally terrific Priyanshu Painyuli as the crooked broker Robin. As the show proceeds, they appear sporadically, feeling more like superficialities than rounded characters, padded up in an already overburdened season. Was particularly disappointed with how the Tyagi subplot ended. And that's one of many disappointments in store for me in the new season.

The writing becomes pretty average in these portions, and continues to do so till the finale. Bar for a few moments of sparkle here and there. Mirzapur 2 retains some form in the blood-soaked finale, but it still turns out to be very predictable and fang-less, with a feeble promise of another season.

What saves the series, somewhat, are the sparkling dialogues and the performances. Pankaj Tripathi competes with Divyenndu for the best lines of the show. His deadpan delivery of dialogues makes Kaleen Bhaiya a difficult antagonist to read, making him a very enigmatic. And Only Tripathi can get away with a line like "Tum insaan ho ki ling?"!

Divyenndu's loose canon Munna gets a wider berth to spread his terror while also continue to show his frustration of being kept under his father's wings. In a very smart Easter egg, Munna is seen playing GTA5, where he plays Trevor, a character as crazy, psychopathic and dangerous as him. And as Munna, Divyenndu is just... fantastic, grinding and chewing each scene with an aggressive candor. But was anyone interested in seeing Munna as a loving husband?

Ali Fazal, who showed us a new facet of his histrionics in the last season, displays even more nuances the second time around. Watch him in the scene where he shares bed with Golu and then asks her if it is okay to cry, before breaking down. Fantastic display of acting there. He depicts the anguished pain of a warrior, once vain in his strength with complete conviction.

Shweta Tripathi Sharma does alright as Golu, who has gained a new personality following the deaths of her sister and her best friend. Golu is completely agenda-driven in her vendetta, not letting her once-brother-in-law distract himself in a possible romance with a woman, who, like them, has her life change drastically thanks to Munna. While I understand the need for Golu to tighten up her personality, it sadly makes the talented actress contained within a very one-note performance. It is also tragic that after the fifth episode, their revenge saga gets diluted due to the multiple storylines.

Rasika Dugal is riveting as the scheming Beena, but even she gets less scope in the second half of the series. The rest of the supporting cast - Kulbhushan Kharbanda, Amit Sial, Anjum Sharma, Sheeba Chaddha, Rajesh Tailang, Isha Talwar, Anil George, Harshita Gaur - are all commendable.

- The Riveting First Half

- A Stretched Out, Boring Second Half

Mirzapur 2 is meaner, badder and darker than the first season, but suffers hugely from a mid-season lag. In Game of Thrones language (Mirzapur is after all, UP ka GoT), it begins off like season 4, turns for the worse into season five and ends on a whimpering note like season 8. All episodes of Mirzapur season 2 is streaming on Amazon Prime Video.

PS - We had earlier published a more favourable review of Mirzapur 2 based on the first five episodes. But like the ongoing year, who thought the series would take such a turn in the second half? Hence the change in both the review and rating.

(The above story first appeared on LatestLY on Oct 23, 2020 01:01 AM IST. For more news and updates on politics, world, sports, entertainment and lifestyle, log on to our website latestly.com).