Money Heist Season Finale is coming in two instalments i.e Vol 1 and Vol 2 (arriving in December) and the first one is all set to premiere on Netflix on September 3, 2021. Check out the early reviews here. 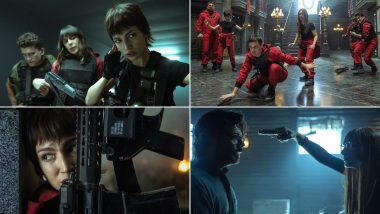 Stop everything! As the fan favourite crime thriller Money Heist, also known as La Casa De Papel is back with its fifth and final season. The greatest heist in history is out on Netflix. However, the show this time will release in two parts. The first part is releasing today (September 3), and the second part in December this year. Having said that, the early reviews of the show are out and seem like Money Heist never disappoints. So, let us check out Money Heist Season 5 Volume 1 verdict below. Money Heist Season 5: Ahead of the Season’s Finale Premiere, Netizens Flood Twitter With Memes and Exciting Messages!

News18: "You will find some of their actions highly questionable while supporting them simultaneously, and this is one of the themes the show thrives on. Considering all its flaws and loopholes, Money Heist is worth the wait and will leave you wanting more until you decide to move on to the next series."

The Indian Express: "Money Heist is known to rely heavily on flashbacks, time-jumps and characters’ backstories. Its season five is no different. In a close to one-and-a-half-hour I saw, it’s pacy, heart thumping and unpredictable. If its remaining episodes manage to keep the same pace, Money Heist 5 is going to be the show’s most explosive season." Money Heist's Professor Alvaro Morte Shares Happy Picture With the Team Ahead of the Season Finale Premiere.

Telegraph: With four stars, the reviewer writes, "The cheerfully silly hit Netflix series returns for a fifth and final series - it's full of tension to the very end."

Going by the write-ups, all we can say is that the last and final season of the series is going to be a blast. As per the above reviews, Money Heist Part 5 Volume 1 is surely living up to its expectations. Stay tuned!

(The above story first appeared on LatestLY on Sep 03, 2021 01:28 PM IST. For more news and updates on politics, world, sports, entertainment and lifestyle, log on to our website latestly.com).