Mukul Chadda Speaks on His Role in ZEE5’s Sunflower, on OTT Revolution and a Fave Series He Wants to Adapt (LatestLY Exclusive)

Mukul Chadda will be seen in ZEE5's thriller series Sunflower essaying a key role. The actor in an exclusive chat with LatestLY talked about his role in the series and much more. Check it out. 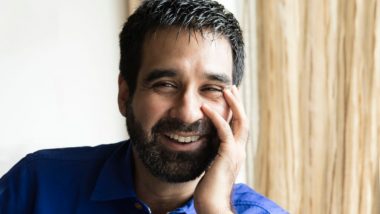 OTT platform ZEE5 has been streaming a lot of amazing content for quite a long time, and their latest offering Sunflower looks no different. Helmed by Vikas Bahl, this one is a crime series that narrates a thrilling murder mystery that takes place in a society. The web show stars a terrific ensemble cast which includes Sunil Grover, Ranvir Shorey, Mukul Chadda, Girish Kulkarni, Ashish Vidyarthi, and more. Now, we at LatestLY got a chance to get chatty with actor Mukul from the series who talked about his character and a lot more. Sunflower Trailer: Sunil Grover, Ranvir Shorey's Comedy-Thriller Promises Quirky Actions; Streaming on ZEE5 From June 11 (Watch Video).

Mukul plays the role of Mr. Ahuja in Sunflower who happens to be a resident in the housing society where the murder takes place. Talking about his role, he said, “I play this man who gets angry way too easily in the series which is the kind of a role I have never portrayed on screen ever." "The web series has all the flavours that will make the audience feel many emotions at the same time,” he added further. Sunflower: Sunil Grover Says the First Look Poster of His Upcoming Crime-Comedy Show Is All About Defining the Quirks About His Character.

Further on being quizzed which is his favourite series of all time, Mukul didn’t choose one but gave us many names. Game of Thrones, Breaking Bad are his utmost favs, whereas when it comes to Hindi content he picked Paatal Lok. The actor also said that if given a chance he would adapt Breaking Bad wherein he wants to essay the role of Walter White. Woah! Sunflower Teaser: Sunil Grover, Ranvir Shorey’s Whodunit Thriller Looks Intriguing, ZEE5 Series to Premiere on June 11 (Watch Video).

Our talk didn’t end there as when asked about the OTT revolution amid the pandemic, he replied, “It’s great that the way people are consuming content is changing and that is why we are getting to see filmmakers experimenting a lot. This also has created many opportunities for actors, so I see the shift in a positive way.”

For the unaware, Mukul Chadda got all noticed by playing the role of Jagdeep Chadda on the Indian adaptation of the series The Office. Meanwhile, after Sunflower, the actor will be seen in Vidya Balan’s Sherni. Sunflower, a ZEE5 Original is slated to premiere on 11 June 2021. Stay tuned!

(The above story first appeared on LatestLY on May 30, 2021 07:42 PM IST. For more news and updates on politics, world, sports, entertainment and lifestyle, log on to our website latestly.com).