Nach Baliye 9: Shantanu Maheshwari To Perform With His Dance Crew and World Of Dance Champions Desi Hoppers on The Show !

In this week's Nach Baliye 9 episode, which will be a choreographers' special week, the jodis will be seen matching steps with their choreographers. 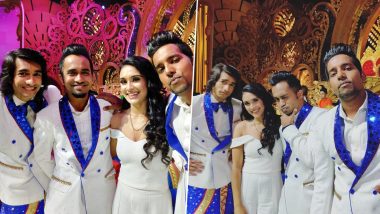 Nach Baliye 9 this week, will see its contestants and choreographers come together for performances, for a 'Choreographer' special week. This week will see the 9 contestant jodis perform and match steps alongside their powerhouse choreographers. And this choreographer week saw a special re-union for contestant Shantanu Maheshwari, for his choreographers Macedon and Subhash are not only his Nach choreographers but also his dance crew Desi Hoppers crew members. Nach Baliye 9: From Raveena Tandon, Ahmed Khan and Shantanu's Argument, to Vishal-Madhurima and Aly- Natasa's Terrific Comeback, Here Are Highlights Of Tonight's Episode!

It can be recalled that Shantanu and his crew Desi Hoppers also represented India and are also the 2015 'World of Dance' champions, who have made their country proud. However, it will only be Shantanu and his crew performing on stage, while Nityaami will be seen taking a small break to rest her injured knee (she has been constantly performing with her leg brace on).

Looks like Shantanu and his spat with the judges that took place last week was all forgotten for once again, Ahmed Khan and Raveena Tandon were all praises for jodi no 9 'Nishan'.

The trio's performance which was supposedly a mix of Indo and Western dance styles had judges Raveena Tandon and Ahmed Khan also on their feet! And Raveena even went ahead to tell Shantanu, Macedon and Subhash that she now knows why they have made the country so proud with their dancing talent! Well, was it a Hi5 performance? What do you think?

(The above story first appeared on LatestLY on Sep 19, 2019 04:16 PM IST. For more news and updates on politics, world, sports, entertainment and lifestyle, log on to our website latestly.com).