Nach Baliye 9: Vivek Dahiya and Divyanka Tripathi Drop Out of The Premiere Episode After Former's Hospitalisation! 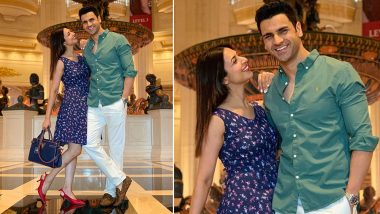 For all those who were eagerly waiting to see Divyanka Tripathi and Vivek Dahiya back on the Nach Baliye 9 stage after their won season 8 of the show, disappointment awaits, for the pair has dropped out owing to Vivek's ill health. A few days back, Vivek and Divyanka took off to Macau for a much-needed break. However, on their return back to India, Vivek Dahiya fell ill and has been hospitalized. Owing to this, the pair has dropped out of the premiere of Nach Baliye 9 where they were all set to perform and anchor a segment of the episode. Nach Baliye 9: Confirmed! Vivek Dahiya Joins Divyanka Tripathi in Hosting the Grand Premiere of Salman Khan’s Reality Show

Confirming the news to Pinkvilla, Divyanka revealed, "Yes, Vivek has been extremely unwell. I have been shuffling between the shoot and hospital and luckily my family is also going to be in town soon to help us out. He is still recuperating and has been asked to stay on bed rest for a few days even post getting discharged."

For the record, Vivek had developed high fever and severe stomach pain on the pair's return from their trip. When he was admitted to the hospital, he was diagnosed with an intestinal infection and liver abyss. Divyanka Tripathi and Vivek Dahiya on a Romantic Getaway to Celebrate Their Third Wedding Anniversary (View Pics)

However, Vivek and Divyanka, have already shot for their dance performance, the lady revealed to the daily. "We've shot for our performance piece but anchoring would not be possible for Vivek. I'm not sure either about my involvement in it. Busy with him for now."

Nach Baliye 9 will be produced by Salman Khan and judged by Raveena Tandon and Ahmad Khan. This time according to the hatke theme of the show includes couples as well as ex-couples. Sadly, while Vivek and Divyanka won't be seen on the Nach Baliye 9 stage, we sincerely hope to see their performance and also wish Vivek a speedy recovery.

(The above story first appeared on LatestLY on Jul 03, 2019 04:01 PM IST. For more news and updates on politics, world, sports, entertainment and lifestyle, log on to our website latestly.com).