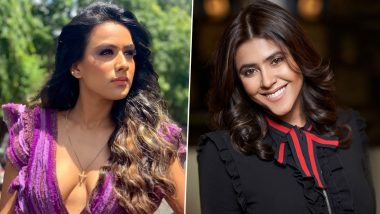 Ekta Kapoor's Naagin 4, starring Nia Sharma, Vijayendra Kumeria, Rashami Desai and Anita Hassanandani will soon be bidding goodbye to the audience post lockdown. In a video that Ekta Kapoor posted, she revealed that Naagin 4 will end in a spectacular 4-part finale and make way for Naagin 5. She also expressed her gratitude to the actors of Naagin 4 and acknowledged how she had worked a little lesson Naagin 4, in comparison to her other Naagin seasons. She also promised to remedy that in season 5 and promised fans that the next Naagin season will be a better one. Ekta Kapoor Confirms Naagin 5, Says 'Naagin 4 Will End With A 4 Episode Fantastic Finale And We Will Immediately Get Into Naagin 5'(Watch Video).

Ekta had said, "Nia (Sharma), Anita (Hassanandani), Vijayendra (Kumeria), Jasmin (Bhasin), you guys have been outstanding. You guys have done a brilliant job. If anyone has led you guys on, it has been because I worked a little less on the story this time. So I am trying my best to do my best." And actress Nia Sharma, who is the lead of Naagin 4, acknowledging Ekta's apology, told her that she need not justify herself. Naagin 4 Creative Director Mukta Dhond Shuts Down Reports of Show Going Off-Air, Teases Fans With A Major Twist and A Super-Villain's Entry (Deets Inside).

Someone of your Stature owes no explanation! Yet you’ve been so considerate to have taken it upon yourself, said things that mean the most for us at this moment. I immensely respect your gesture!

Ekta had also assured fans that Naagin 5 will be better than Naagin 4 and said, "This time I am hoping to come back with a better season and I hope you guys come back to see the show and see what we are doing now. All I'd like to say to Nia and the other actors is that thank you for being a part of Naagin 4. Thank you for helping us complete Naagin 4, and am hoping to come up with something special because you guys deserve it you guys have been fantastic. I hope the viewers are excited about Naagin 5 because we have worked very hard on the script and very very diligently to come up with the new season."

(The above story first appeared on LatestLY on May 28, 2020 07:20 PM IST. For more news and updates on politics, world, sports, entertainment and lifestyle, log on to our website latestly.com).