Ekta Kapoor Confirms Naagin 5, Says 'Naagin 4 Will End With A 4 Episode Fantastic Finale And We Will Immediately Get Into Naagin 5' (Watch Video)

Ekta Kapoor, the creator of one of television's much loved supernatural series, the Naagin franchise, has finally set the record straight on the whole Naagin 4 going off-air to make way for Naagin 5' hullabaloo in the media. The TV Czarina confirmed that Naagin 4 will be ending after the lockdown and they will immediately jump the storyline into the 5th season. 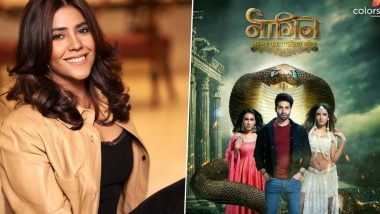 Ekta Kapoor, the creator of one of television's much loved supernatural series, the Naagin franchise, has finally set the record straight on the whole Naagin 4 going off-air to make way for Naagin 5' hullabaloo in the media. The TV Czarina confirmed that Naagin 4 will be ending after the lockdown and they will immediately jump the storyline into the 5th season. Ekta also acknowledged what went wrong with Naagin 4, but thanked the show's lead cast - Vijayendra Kumeria, Nia Sharma, Jasmin Bhasin and Anita Hassanandani for their brilliant performances that contributed to Naagin 4's success. Naagin 4's Failure Leads To Show Being Scrapped, Naagin 5 In The Making Post Lockdown? (Deets Inside).

In a video on Twitter, the producer put to rest all the rumours surrounding Naagin 4 and set the record straight. Said Ekta, " I have been asked constantly if Naagin 4 is ending, is Naagin 5 starting, was there a problem with the actors? Even though Mukta (Dhond) is giving interviews, let me clear this for all." Naagin 4 Creative Director Mukta Dhond Shuts Down Reports of Show Going Off-Air, Teases Fans With A Major Twist and A Super-Villain's Entry (Deets Inside).

Ekta revealed, "Naagin 4 is going to be getting a fantastic end because you can't start a story from the middle. You have to end it so that a new one can begin. So we are going to be ending Naagin 4 with a 4-episode fantastic finale and then getting into Naagin 5 immediately."

Check Out Her Video Below:

Ekta continued, "Now what I really have to say about the actors is Nia (Sharma), Anita (Hassanandani), Vijayendra (Kumeria), Jasmin (Bhasin), you guys have been outstanding. You guys have done a brilliant job. If anyone has led you guys on, it has been because I worked a little less on the story this time. So I am trying my best to do my best." Naagin 4: Jasmin Bhasin's Character Comes to an Abrupt End in Ekta Kapoor's Supernatural Show.

Assuring fans that she will bring back a better season with Naagin 5, Ekta went on to say, "This time I am hoping to come back with a better season and I hope you guys come back to see the show and see what we are doing now. All I'd like to say to Nia and the other actors is that thank you for being a part of Naagin 4. Thank you for helping us complete Naagin 4, and am hoping to come up with something special because you guys deserve it you guys have been fantastic. "I hope the viewers are excited about Naagin 5 because we have worked very hard on the script and very very diligently to come up with the new season," said Ekta. Naagin 4: Rashami Desai Replaces Dil Se Dil Tak Co-Star Jasmin Bhasin, Check Out Her Look (View Pics).

She also assured fans that she has been going through all of their suggestions with regards to the casting for the 5th season. "As far as suggestions go, I always take them in but I cannot be sure I'll cast those actors because it depends on the script. So no more rumours, and we will be back to shooting with the ending of Naagin 4 and the beginning of Naagin 5," Ekta concluded. Phew!!! Now everyone's story is clear.

(The above story first appeared on LatestLY on May 28, 2020 04:11 PM IST. For more news and updates on politics, world, sports, entertainment and lifestyle, log on to our website latestly.com).