Nitish Bharadwaj Reacts on Being Called 'Diplomatic' By Mukesh Khanna, Says 'It Helps In Not Hurting People Unnecessarily' 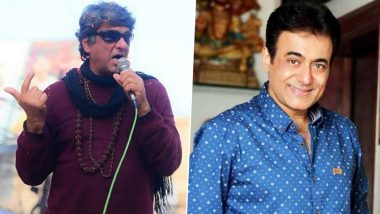 While everyone around here is pretty happy with the return of Ramayan and Mahabharat to television amidst the on-going nationwide lockdown, Mahabharat actors Nitish Bharadwaj and Mukesh Khanna are sort of embroiled in a tu-tu-mai-mai of sorts. It all started with Mukesh Khanna taking a dig at Sonakshi Sinha for not answering a Ramayan-based question on KBC. Mukesh said that the Ramayan re-run on DD will 'help people like her' know more about the epic battle. Mukesh Khanna Takes a Sly Dig at Sonakshi Sinha, Says ‘Ramayan and Mahabharat’s Rerun Will Help People Like Her Who Have No Knowledge’.

From amongst many who came to Sonakshi's defence, one was actor and Mukesh's Mahabharat co-star Nitish Bharadwaj, who played Krishna on the show. Pulling up Mukesh for belittling Sonakshi, Nitish had said, "Why target Sonakshi alone? There's always a better way to say the same thing. A balanced, soft and empathetic way; and it is received better too. Seniors seem worthy of respect if they walk the path of empathy." Nitish Bharadwaj, Mahabharat's Krishna, Defends Sonakshi Sinha From Mukesh Khanna's Jibe On Her Ignorance of Ramayan!.

In a recent interview, Mukesh had stated that his Sonakshi comment was blown out of proportion and that he had not meant to insult the Dabangg actress, but merely used her as an example. He also subtly lashed out at Nitish and said that the latter was diplomatic and that he (Mukesh) had all the rights to say what he wants and does not fear if today's generation dislikes him.

And now, Nitish, reacting to Mukesh calling him 'diplomatic', has said that diplomacy does not hurt anyone's feelings. In a conversation with TOI, Nitish said, "I learnt diplomacy from Krishna. It helps in not hurting people unnecessarily. I feel Mukeshji has failed to read through and appreciate the larger picture of our myopic education system, which I had highlighted. Our school curriculum needs reforms. Seniors should be empathetic and see a larger picture of the problem at hand. I hope he will do so." Mukesh Khanna Reveals That He Rejected Ekta Kapoor's Kahaani Hamaaray Mahaabhaarat Ki, Says 'I Am Against the Way She Projects Women in Her Daily Soaps'.

Mukesh also lashed out at Ekta Kapoor for her version of Mahabharat. For those who are unaware, Ekta Kapoor made her own version the Kurukshetra war titled Kahaani Humaaray Mahaabhaarat Ki, an adaptation that Mukesh Khanna did not like and appreciate at all. Mukesh had lashed out at Ekta for getting her heroes dressed like Greeks and giving her Draupadi (Anita Hassanandani) a tattoo on her shoulder. The actor, who became a name to reckon with as Bhishma Pitamah and also as Shaktimaan, had said that Ekta had made a mockery of the Hindu mythological epic.

(The above story first appeared on LatestLY on Apr 16, 2020 07:43 PM IST. For more news and updates on politics, world, sports, entertainment and lifestyle, log on to our website latestly.com).