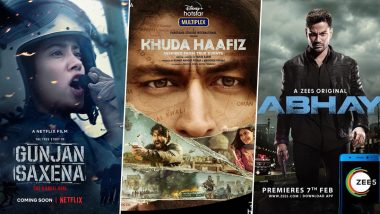 Jamie Foxx, Joseph Gordon-Levitt's Netflix film Project Power is yet another big release of the week.  A lot of digital premieres to catch up before Independence Day with a popcorn tub as we give you the complete info of the following OTT releases with their premiere date and platform details. Here is the complete list of OTT Releases of the Week right prior to Independence Day 2020. Zindagi TV Shows Return on Zee5; Here Are The Pakistani Series You Can Watch on the Streaming Platform

Janhvi Kapoor steps in the shoes of Flight Lieutenant Gunjan Saxena, the female pilot who was assigned in flying rescue and recce missions for the Indian Air Force during the Kargil War. The trailer has impressed the audience and Janhvi looks promising playing the real-life character with a lot of conviction. The film stars Pankaj Tripathi as Gunjan Saxena's supportive father, and Vineet Singh, an officer, who goes hard on Gunjan Saxena to bring the best out of her. Gunjan Saxena is all set for its digital release on Netflix on August 12. Gunjan Saxena – The Kargil Girl Movie Review: A Genial Janhvi Kapoor and a Fabulous Pankaj Tripathi Effuse Warmth With Their Bonding in This Likeable Biopic.

Vidyut Jammwal’s Disney+ Hotstar movie Khuda Hafiz is all set for August 14 release. The trailer of the film has impressed the audiences where we have our action hero on his way to find his missing wife in the middle-east. Vidyut plays Sameer Choudhary, while Shivaleeka Oberoi plays his missing wife, Nargis. Sameer’s search makes him discover a big human trafficking nexus as he has to save his wife from this big mess.

Ariel Schulman and Henry Joost directed Netflix film Project Power is a superhero action flick with a stellar cast including  Jamie Foxx, Joseph Gordon-Levitt, Dominique Fishback, Machine Gun Kelly, Rodrigo Santoro, Amy Landecker and Allen Maldonado. Speaking about the plot of the movie, it is all about a pill that gives superpowers and these powers last for five minutes per pill. The power possessed by the individual differs from person to person and the basic premise is that Foxx and Gordon-Levitt team up to take down the enemies. Project Power airs on Netflix on August 14.

Anirban Bhattacharya starrer Detective will be heading for a Direct-to-Digital release on Hoichoi. Hoichoi recently announced a new property a day before, “First Day First Show” which will help the direct OTT releases of Bengali movies and Detective is the first film to premiere under this. It also stars Ishaa Saha in a major role. The suspense-thriller is all set to air on Hoichoi from August 14

Kunal Kemmu's crime show Abhay is renewed for the second season and now it brings  Ram Kapoor and Chunky Panday in the fold. The premise of the second season is that protagonist Abhay Pratap Singh (Kunal Kemmu) is the police officer being blackmailed by a prisoner (Ram Kapoor), who has kidnapped kids in the city. Abhay has to play by the rules of the game in front of the mastermind (Chunky Panday) to save the children. Abhay 2 premieres on Zee5 on August 14.

Churails is an upcoming Pakistani show coming to Zee5 on August 11. The plot of the Zindagi original series revolves around four women who come from different walks of life – lawyer, wedding planner, boxer and ex-convict, who team up to build a detective agency to expose the cheating husbands. They get the support of women in this newly formed company but things get worse as big players block their way.

Man vs Wild's Bear Grylls is back with yet another adventure show but this time he will be touring the Fijian terrain The Amazon Prime Video series is titled World’s Toughest Race: Eco-Challenge Fiji is a 10-episode documentary series, hosted by Bear himself as he covers the tells the enticing expedition race, in which 66 teams from 30 countries race non-stop for 11 days, 24 hours a day. The show premieres on August 14th.

The second season of Dirty John series stars Amanda Peet and Christian Slater and tells us the love gone wrong tale following the shocking events of a marriage breakdown. The first series was well received by the critics and holds an 88% ratings on Rotten Tomatoes. The lead Amanda Peet and Christian Slater return in an intriguing face-off in the second season of the anthology series. Dirty John Season 2 premiers on Netflix India on August 14.

Netflix's upcoming crime show showcases the story of the 'robbery of the century'. Titled as The Great Heist, it focuses on the brazen multi-million dollar robbery of Colombia's central bank in Valledupar. The series is based on true events and draws inspiration from Alfredo Serrano Zabala's acclaimed book ‘This Is How I Robbed The Bank'.Its all about true events when In October 1994 thieves armed with masks, welding machines, oxygen tanks and other tools carried out one of the most elaborate heists ever seen as they successfully stole 24 Billion Columbian Pesos. The Great Heist premieres on Netflix on August 14.

(The above story first appeared on LatestLY on Aug 10, 2020 08:05 PM IST. For more news and updates on politics, world, sports, entertainment and lifestyle, log on to our website latestly.com).