Streamer ZEE5 on Wednesday unveiled its first Pakistani original series "Churails", which will premiere on its platform in August. Recently, ZEE Entertainment Enterprises Ltd announced the return of its much-loved content brand Zindagi on ZEE5. 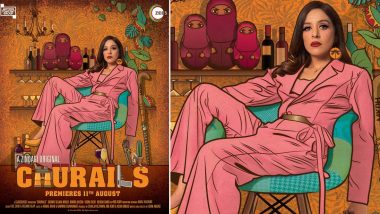 Streamer ZEE5 on Wednesday unveiled its first Pakistani original series "Churails", which will premiere on its platform in August. Recently, ZEE Entertainment Enterprises Ltd announced the return of its much-loved content brand Zindagi on ZEE5.  "Churails" is the first original from Zindagi and will start streaming on ZEE5 from August 11, the streamer said in a statement.

Directed by critically-acclaimed director Asim Abbasi, the show aims to challenge the hypocrisy of patriarchal societies which curtail women and their rights. Angad Bedi Shares His Look from MumBhai As Shoot For ALTBalaji-ZEE5 Web Series Begins Today (View Post)

"Zindagi's commitment to truly original content that has a voice and can transcend borders, has provided me with the perfect platform to create a show like 'Churails'," Abbasi said in a statement. The director, best known for his 2018 film "Cake" which was Pakistan's official selection for 2019 Oscars, said the show raises pertinent questions about women's rights and he is hopeful that it will strike a chord with the global audiences. "A story about strong women, embarking on a journey of self-discovery, empowerment and sisterhood, I believe 'Churails' is a timely show with pertinent themes that will resonate with audiences globally," he added. Abhay 2: Chunky Pandey to Make Digital Debut As a Villain in Kunal Kemmu, Ram Kapoor’s Zee5 Show

The series will narrate the story of four self-proclaimed Churails (witches), who come together to open a covert detective agency to expose cheating husbands amongst the city's elite. "As their operations expand, they come to be saviours of abused, harassed and mistreated women. The gripping and fast-paced storyline covers myriad issues such as child abuse, sexism, domination of class and race," the official plotline read.

"Churails" will feature an ensemble cast led by Sarwat Gilani, Nimra Bucha, Mehar Bano and Yasra Rizvi. ZEE5 and Zindagi have also released the poster on their social media handles, giving the audience a glimpse into the world of "Churails".