Zindagi TV Shows Return on Zee5; Here Are The Pakistani Series You Can Watch on the Streaming Platform 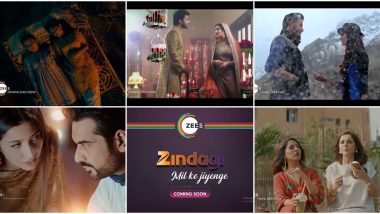 Zee5 app will soon see a major addition to their ever-expanding show collection. The OTT platform will now start telecasting its rebranded Zindagi Digital shows on the OTT platform's premium subscription. In a promo that Zee5 released, they have teased its viewers about the return of the old Zindagi shows, but also the release of 5 new shows. Pavitra Rishta Once Again: ZEE5 Cuts Special Promo Bringing Back Sushant Singh Rajput's Manav and Ankita Lokhande's Archana On Screen (Watch Video).

This move comes as news considering how after 2016 Uri Attacks, all Pakistani shows were taken off of the viewing list of the Zindagi Channel and how widespread protests resulted in the Indian entertainment industry banning Pakistani actors and singers. Unlock The Haunted App Trailer: Hina Khan and Kushal Tandon Have Ulterior Motives In This Zee5 Horror Thriller (Watch Video).

Recently, T-Series courted trouble when the music magnate's YouTube channel featured Atif Aslam's "Kinna Sona" song. The channel deleted the video and issued an apology to Maharashtra Navnirman Sena for the mistake. We wonder what will be said about Pakistani content airing on the ZEE5 app.

(The above story first appeared on LatestLY on Jul 17, 2020 02:24 PM IST. For more news and updates on politics, world, sports, entertainment and lifestyle, log on to our website latestly.com).