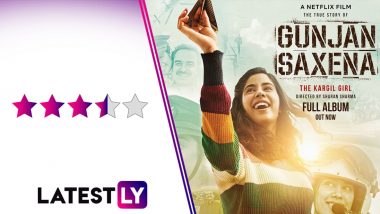 For those who are unaware, Gunjan Saxena was one of the first female IAF pilots in Indian army, and also the only female pilot during the Kargil war (hence that epithet). While it says a lot about how our own first line of defense is still clearing cobwebs of sexism till recently, Gunjan Saxena's life-story is definitely inspiring for the right reasons.

Debutant Sharan Sharma's film depicts her life, starting from the time when an air-hostess takes a young Gunjan to the cockpit, after her brother denies her a window seat. While I am not very sure if kids are allowed to access cockpits in 1984 (reminds me of the starkly humorous scene in Airplane!), the sight of the vast sky ahead of her leaves the little girl awe-struck. That's the moment Gunjan began to sow dreams of being a pilot. Gunjan Saxena: Has Netflix Dropped Karan Johar’s Name From Posters and Trailer of Janhvi Kapoor Film Fearing Sushant Singh Rajput’s Controversy? Here’s a Fact Check!

As a teenager, Gunjan (Janhvi Kapoor) still harbours the same dream. Her mother (a charming Ayesha Raza Mishra) and her elder brother (Angad Bedi, effective but underused) are against the idea, the former, because of her upbringing, the latter claiming that he is being protective. Only her father (Pankaj Tripathi) is supportive of her dreams.

Watch the Trailer of Gunjan Saxena:

When Gunjan couldn't go ahead with her dreams of being an commercial airline pilot due to financial constraints, her father pushes her into applying for Air Force. Despite the setbacks in the way, Gunjan makes it through, because, as her invigilator puts it, she was born to fly! Only that her real test was yet to come.

Gunjan Saxena - The Kargil Girl, despite the pompous name, is actually a simple film, and it's the simplicity that works in its favour. The premise may move on a predictable pattern and some of the scenes are the usual drama variety, but the emotions infused feel genuine.

The best scenes in the biopic are the ones between the father and daughter. It really helps that Janhvi looks a teenager in those portions, and it also helps that the makers cast a fine performer like Tripathi as her father. It is a brilliant performance from the actor, backed by some really good writing and decent execution there.

Tripathi's character falls in the same mould as what he did in Bareilly Ki Barfi - a soft-spoken paternal figure who is perhaps the biggest feminist among them all. But his role in Gunjan Saxena is  stronger and more likeable - being funny, wry, mild and yet assertive enough. That too, with indulging in dramebaazi.

Like, there is a scene where his son joins him for a drink and chides him for allowing Gunjan to harbour dreams of a pilot. Instead of scolding him, which was the expected way to go, Tripathi's character merely tells his son that he should keep away from drinks.

The best moment for both the character and the actor comes near the third act, when a disappointed Gunjan thinks of hanging up her boots and looking to settle down. Her father doesn't say much, but just takes her to the kitchen and... well, I would love you to watch this scene on your own. It is a fantastic bit of acting from Tripathi in this scene, where he keeps his disappointment in his eyes and the little quiver in his voice, but doesn't allow it to take over his personality.

Beyond the father-daughter scenes, Gunjan's portions, portraying her difficulty adjusting in what has been an all-male camp at the IAF training barracks in Udhampur are also engaging. Especially, her interactions with her sceptical senior Major Dileep Singh (Vineet Kumar Singh). Vineet is a really good actor, and even though his character skids to a one-track note, he makes it credible enough and grounded enough. Manav Vij, who plays the strict (but far more open-minded) HO, also pitches in a nice performance.

What affects this particular track, though, is the cliched manner in how sexism is portrayed here. The movie stays true when it depicts the challenges Gunjan face in the campus, from no ladies' toilet to no proper changing rooms. Not to mention, her seniors' reluctance to train her. The real-life Gunjan also mentioned these difficulties in her interviews, but while speaking to The Week, she also adds that after the initial apprehensions, her male colleagues were more acceptable of her as part of their squad. Also, she wasn't the only female trainee pilot in the batch, there was another girl too.

Sharma and his co-writer Nikhil Mehrotra have every right to change stuff a bit for dramatic purposes. Bollywood biopics are known to have done that - see how Dangal and Gold changed the how the real-life matches got played to add more thrill.

In the case of Gunjan Saxena, though, the scenes become repetitively caricatured, the highlight being the sequence where Singh's character makes Gunjan do panja with a male colleague. Just to show that she, being a female, is 'weaker'. Might make a good dramatic point, but I feel this could have been portrayed in a better way. It doesn't bring the film down much, but the drama feels overplayed and artificial. As if the film is seeking a baddie that refuses to come out of the shadows.

The movie also plays Gunjan's interactions with her brother during the Kargil war in a similar note. But I liked this part better. He claims he is trying to protect her; we want her to shut him down. Surprisingly, she doesn't. Later in another scene, when he points out that the world won't change in its attitude towards women, she quietly asks him to change first. It is small moments like this that makes the biopic worth a watch.

The climax, involving a thrilling rescue operation, is deftly handled, though people who expected to see more of Gunjan's Kargil exploits might be disappointed. But then Gunjan Saxena - The Kargil Girl isn't really a war film, it is about a girl who aims for the skies and achieves that. And in that aspect, Gunjan Saxena works as a movie, because we finally have a character whose ambitions aren't driven by chest-thumping patriotism, but easily relatable dreams! Just like Farhan Akhtar's underrated Lakshya.

Amit Trivedi's score is decent, with "Bharat Ki Beti" being the pick of the lot.

Now coming to the big question, especially with the whole nepotism banter around - how is Janhvi Kapoor in her third film? Honestly speaking, Janhvi shows a marked improvement as an actress from her debut film, though there are still some visible rough edges. She has a likeable screen presence, and fits in the role well. And she does good in her scenes with Tripathi. The best part is, Janhvi owns the role to a T.

There are a couple of portions where she still feels raw. Like an outburst scene in the second half, that should have come across as a powerful statement, but feels underwhelming because Janhvi is not completely convincing in the scene. Still, a couple more films like this that get her to improve herself as an actress, and we can have a bonafide star in her!

- Cliched Treatment of A Couple of Tracks

Gunjan Saxena - The Kargil Girl is a film that steers away from typical stereotypes related to a war biopic, by being a warm and engaging coming-of-age drama. It is simplistic, heartwarming and inspiring, while doing its bit to break the shackles of misogyny and sexism. Also, Pankaj Tripathi and Janhvi Kapoor make a cool combo. Gunjan Saxena - The Kargil Girl is streaming on Netflix from August 12.

(The above story first appeared on LatestLY on Aug 10, 2020 04:14 PM IST. For more news and updates on politics, world, sports, entertainment and lifestyle, log on to our website latestly.com).