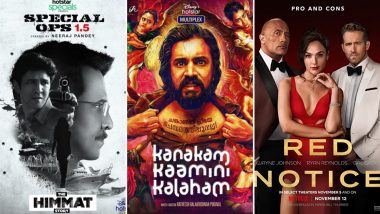 We are stepping on the second week of November 2021 after serving a festive week of Diwali, and there are several intriguing movies and series releasing on OTT platforms like Disney+ Hotstar, ZEE5, Apple TV+ and Netflix. Talking about the biggest release of the week it would be Special Ops 1.5 - The Himmat Story, which is all set to premiere on Disney+ Hotstar on November 12. Directed by Neeraj Pandey, the series is based on the Parliament attack of 2021, where a young and idealistic RAW agent invented a theory. In 2003 he had a mystery, which is the super interesting tale of Himmat Singh. The action-thriller web show stars KayKay Menon, Aftab Shivdasani, Gautami Kapoor and Vinay Pathak, among others. Special Ops 1.5 Trailer: Kay Kay Menon’s Disney+ Hotstar Series Promises Gripping Story About RAW Agent Himmat Singh! (Watch Video).

Another big release of the week would be Red Notice, which will drop on Netflix. Helmed by Rawson Marshall Thurber, after the theatrical release on November 5, the action-comedy movie will digitally stream on Netflix from November 12. The film stars Dwayne Johnson, Ryan Reynolds and Gal Gadot in the lead roles. The synopsis of the flick reads, "An Interpol-issued red notice is a global alert to hunt and capture the world’s most wanted. But when a daring heist brings together the FBI's top profiler (Dwayne) and two rival criminals (Gal, Ryan), there's no telling what will happen." Another interesting release of the week would be Kanakam Kaamini Kalaham, which is all set to stream on Disney+ Hotstar from November 12. The Malayalam movie stars Nivin Pauly, Grace Antony, Vinay Forrt in key roles and Sudheesh, Jaffar Idukki, Joy Mathew, Vincy Aloshious, Sivadasan Kannur in supporting roles. Red Notice Movie Review: Dwayne Johnson, Ryan Reynolds, Gal Gadot's Thriller Doesn't Win Over Critics.

(The above story first appeared on LatestLY on Nov 06, 2021 03:23 PM IST. For more news and updates on politics, world, sports, entertainment and lifestyle, log on to our website latestly.com).