Helmed by Rawson Marshall Thurber, after the theatrical release, Red Notice will digitally stream on Netflix from November 12. Here, check out what critics have to say about the film. Read on. 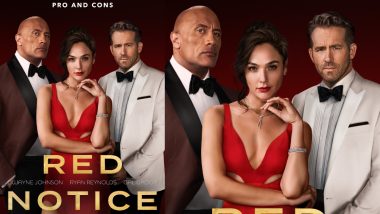 Dwayne Johnson, Ryan Reynolds, and Gal Gadot-starrer Red Notice released in limited theatres on November 5, 2021. The movie will digitally debut on the streaming platform Netflix on November 12. Helmed by Rawson Marshall Thurber, the action-comedy's trailer was loved by audiences and critics. The story of the Hollywood flick revolves around how an Interpol agent tracks the world's most wanted art thief. Having said that, reviews of Red Notice are out, and going by it, we can say that the movie is nay. Well, check out what critics have to say below. Red Notice Trailer Out! Ryan Reynolds, Dwayne Johnson, Gal Gadot's Thriller To Stream on Netflix From November 12 (Watch Video).

Deadline: "Famous faces help blockbuster movies grab the audience’s attention, but the story is what keeps their attention, and Johnson, Reynolds and Gadot aren’t enough. Red Notice struggles to stand out in a genre where other films do it better and on much smaller budgets. It’s just another blockbuster Netflix film that will get lost in the content shuffle and forgotten."

Forbes: "It plays as a skewed remake of Hobbs and Shaw (with Reynolds subbed in for Jason Statham) with a dash of The Thomas Crown Affair and a prison escape borrowed from Black Widow. It plays akin to a direct-to-video variation for which Asylum became infamous. Think such direct-to-video gems as Transmorphers: Fall of Man, Snakes on a Train or Pirates of Treasure Island." Red Notice: Hugh Jackman Reviews the Trailer of Ryan Reynolds, The Rock and Gal Gadot’s Movie.

Polygon: "Thurber wants to bank on the sex appeal of Red Notice’s central trio, but putting such uninteresting actors at the center of the story is a huge turnoff. The film is meant to look and feel immense, but Steve Jablonsky’s cheap score and the film’s over-reliance on visual effects makes the entire project look oh-so-tiny."

The Hollywood Reporter: "Thurber pads out the character development by giving all three protagonists their respective daddy issues. But that half-baked psychology doesn’t do much to disguise the fact that they’re all playing minor variations on their familiar screen personas, right down to an amusing Vin Diesel gag that’s possibly a sly nod to The Rock’s old Fast and Furious feud."

(The above story first appeared on LatestLY on Nov 05, 2021 07:29 PM IST. For more news and updates on politics, world, sports, entertainment and lifestyle, log on to our website latestly.com).