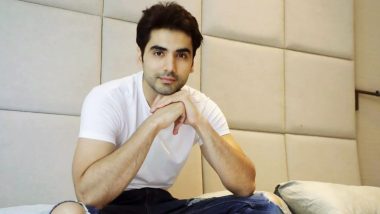 Ishwak Singh's role in the recent web series "Paatal Lok" garnered attention, and the actor is moving on to his next project. In his latest photo, he can be seen reading, seated on his bed. Ishwak reveals he is busy checking out scripts. "Working in bed #scriptreading #screenplays #plays #work #actorslife #ontothenextone," he captioned the shot. Viewers loved his role of the earnest rookie cop Imran Ansari in "Paatal Lok",and for Ishwak the experience was unprecedented. Paatal Lok Actor Ishwak Singh AKA Ansari Says Shooting for Anushka Sharma Show Was like Doing 3 Movies

"The shooting process in the digital world is quite different from that of the movie. While shooting for 'Paatal Lok', it was like shooting for three movies, as the makers had a bigger canvas to paint and a lot more to express and communicate. So, that's the biggest difference I felt was between 'Paatal Lok' and my other projects in Bollywood," he had earlier told IANS. Pataal Lok’s Abhishek Banerjee Believes Casting Played a Part in Changing the Face of Our Cinema.

Before this, he had also featured in films like "Veere Di Wedding" and "Tum Bin II".

(The above story first appeared on LatestLY on Jun 30, 2020 07:39 PM IST. For more news and updates on politics, world, sports, entertainment and lifestyle, log on to our website latestly.com).