Pavitra Rishta 2: Streaming Date, Cast, Trailer, Where To Watch – All You Need To Know About Shaheer Sheikh-Ankita Lokhande’s Digital Show!

Pavitra Rishta's season 2 will be streaming on the OTT platform and will see television's popular actor Shaheer Sheikh playing the role of Manav, a role that made Sushant Singh Rajput a household name. Ankita Lokhande reprises her role as Archana. 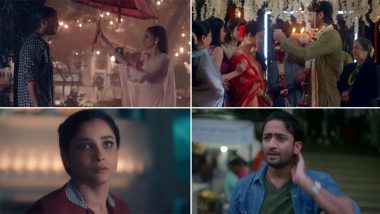 Ekta Kapoor's iconic show Pavitra Rishta which was launched in 2009 is all set to have its season two. While the earlier season starred late actor Sushant Singh Rajput and Ankita Lokhande as Manav and Archana, the latest one sees Shaheer Sheikh stepping into the shoes of SSR. Pavitra Rishta 2 was announced some time back by the makers and will be premiering soon. However, this time, the show has gone the digital route. Shaheer and Ankita's struggles as the main leads will be the highlight of Pavitra Rishta 2. Just in case, you don't know where to watch the show and more, we've got you covered. Ahead of Pavitra Rishta 2 Premiere, Here’s Looking at Sushant Singh Rajput and Ankita Lokhande’s Best Moments From the Earlier Season (Watch Videos).

Pavitra Rishta 2 will see Shaheer Sheikh as Manav, Ankita Lokhande reprising her role as Archana, Usha Nadkarni as Aai, newbie Pooja Bhamrah, and more. The cast this time is a blend of both old and new ones.

They say love can overcome all challenges. And based on the same tagline, Pavitra Rishta 2 will show the story of Manav and Archana's sacred bond and survival. In the teaser and trailer, we see the leads from middle-class families who end up getting married due to a misunderstanding and then fall in love.

Watch the trailer of Pavitra Rishta 2:

Release Date and Where to Watch

Pavitra Rishta 2 is all set to release on September 15, the series will be available for streaming exclusively on ZEE5. However, as per reports, after 55 days, the second season will also be made available on ALTBalaji.

So, are you excited to watch the show in a completely new avatar? Tell us your views in the comment section below. Stay tuned!

(The above story first appeared on LatestLY on Sep 14, 2021 06:13 PM IST. For more news and updates on politics, world, sports, entertainment and lifestyle, log on to our website latestly.com).