Ekta Kapoor in 2009 introduced Manav (Sushant Singh Rajput) and Archana (Ankita Lokhande) with Pavitra Rishta. Fans loved their chemistry on the serial and the rest is history. 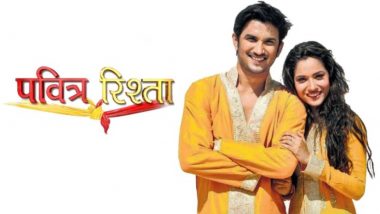 Television queen Ekta Kapoor in 2009 launched a show titled Pavitra Rishta which saw Manav and Archana's love story. Late actor Sushant Singh Rajput and Ankita Lokhande played the leads in the daily soap and made fans cry, laugh, and emotional via their acting. This ZEE TV serial was one of the most hit small screens shows ever. Sadly, SSR passed away in June 2020 and the audience was heartbroken. Now, after a hiatus, the show is making a comeback sans Sushant. Pavitra Rishta 2: Shaheer Sheikh Replaces Late Sushant Singh Rajput as Manav; Ankita Lokhande Back As Archana as Shoot Begins.

Popular TV actor Shaheer Sheikh will be seen playing Manav in the latest season opposite Ankita. However, we do understand the feelings of SSR fans as it's difficult for them to see someone replacing him on the serial. And so, ahead of the digital release of Pavitra Rishta 2 on September 15, let's take a look at some of the best moments of Sushant and Ankita from the old 2009 show. Pavitra Rishta 2: Ahead of the Premiere of Ankita Lokhande, Shaheer Sheikh’s Show, Ekta Kapoor Takes Us Down the Memory Lane (Watch Video).

Their Argument As Couple In The Serial!

The Fun Banter Between The Two!

There's Nafrat and Pyaar Both!

Well, all we can do is cherish these moments featuring the late star SSR. Meanwhile, talking about Pavitra Rishta 2, the show this time has gone digital and will not air on TV. Starring Shaheer as Manav, Ankita as Archana, and Usha Nadkarni as Aai, the show is highly anticipated!

(The above story first appeared on LatestLY on Sep 14, 2021 01:53 PM IST. For more news and updates on politics, world, sports, entertainment and lifestyle, log on to our website latestly.com).