Shah Rukh Khan Not On OTT? We Have 3 Examples To Prove Otherwise

Shah Rukh Khan might just make his digital debut with Disney+Hotstar in a series or such. But it will be wrong to say that he isn't on OTT platforms. We have dug up three instances where SRK had an important role to play in the narratives. 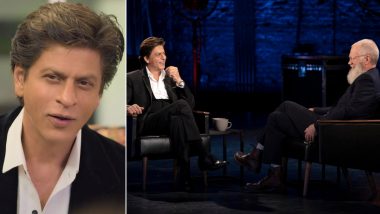 Shah Rukh Khan in Fabulous Lives Of Bollywood Wives and My Next Guest Is With David Letterman (Photo credit: Twitter)

For a recent campaign for Disney+Hotstar, Shah Rukh Khan decided to pun on himself as he is yet to ride the OTT wave. The platform used that as a campaign idea as apart from SRK, they are serving a lot of entertaining content to their viewers and subscribers. Many are suspecting that SRK is on his way to breaking his OTT virginity soon with Hotstar. But it would be wrong to say that Shah Rukh Khan is yet to collaborate or appear in any OTT show. We found three instances where the actor did more than just collaborate.  After Salman Khan Shares Shah Rukh Khan’s Newest Disney+ Hotstar Ad, Fans of the Superstars Go Berserk!

Those who have not watched The Forgotten Army may not know that Shah Rukh Khan had turned narrator for the series. In a few episodes, he would tell the tale of India's freedom struggle. Real footage was used in those sections in the show. Is Shah Rukh Khan-Atlee-Nayanthara Film Named Lion? This Leaked Viral Document Allegedly Reveals the Title

My Next Guest With David Letterman And Shah Rukh Khan

We all have watched the episode and if not the whole of it, we did have a glimpse of SRK narrating his life's journey to David Letterman

The best part of David @Letterman’ My next guest no introduction with @iamsrk #MyNextGuestNeedsNoIntroduction pic.twitter.com/Awyh5NP6kO

While the show was highly flaky and flavourless, Shah Rukh Khan's presence in the last episode was the surviving grace. He regales the guests and age was no bar in that conversation.

Shahrukh Khan in The Fabulous Lives Of Bollywood Wives. @iamsrk is so handsome. pic.twitter.com/N4398ugPR2

Getting a Shah Rukh Khan film confirmed these days is more difficult than sighting him at Mannat or at the airport. While his movies are still rumours even when he has started shooting for two of them, it's nice to recount all the times we snatched a glimpse at him in the last two years.

(The above story first appeared on LatestLY on Sep 16, 2021 05:37 PM IST. For more news and updates on politics, world, sports, entertainment and lifestyle, log on to our website latestly.com).