Television actor Shaheer Sheikh celebrates his birthday today (March 26). The good looking lad was last seen in Star Plus' popular serial Yeh Rishtey Hain Pyaar. Having said that, as he turns 37 today, let's take a look at some lesser-known facts about the star. Read on. 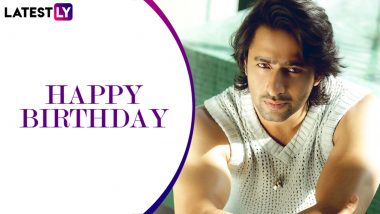 Television actor Shaheer Sheikh celebrates his birthday today (March 26). The good looking lad was last seen in Star Plus' popular serial Yeh Rishtey Hain Pyaar Ke opposite Rhea Sharma. However, that's not it, as he has also wowed the audience by being a part of other shows which include Kuch Rang Pyar Ke Aise Bhi, Mahabharat, Navya, Kya Mast Hai Life, Jhansi Ki Rani and Teri Meri Love. Recently, the star was in the news for getting married to Ruchikaa Kapoor in an intimate ceremony. Having said that, as he turns 37 today, let's take a look at some lesser-known facts about the star. Shaheer Sheikh Birthday Special: From Arjun in Mahabharat to Dev in Kuch Rang Pyaar Ke Aise Bhi, 5 Roles That The Hunk Portrayed To Perfection.

Apart from working in the Indian TV industry, Shaheer has also stirred his magic in Indonesian films. Turis Romantis, Maipo Deapati, and Datu Museng and Indonesian television series like Cinta di Langit Taj Mahal and Mailaikat Tak Bersayap, are a few names of his movies.

Fans Across The Globe

Shaheer is a global name and there's no doubt about it. As the multi-talented actor has been part of many Indonesian films, he enjoys a massive fan following worldwide. Fans abroad go gaga over him.

Shaheer is a fan of Bollywood. Reportedly, he is a Salman Khan fan, however, his most favourite movie of all time is Aamir Khan's Andaz Apna Apna. So, you can call him a Khan fan!!! Shaheer Sheikh and Ruchikaa Kapoor Are Married! Groom Says, ' I'm Looking Forward to My Never-Ending Travels With Her'.

Sheikh was born in the beautiful locale of Jammu and Kashmir’s Bhaderwah. His parents' name is Shahnawaz and Dilshad Sheikh. On the educational front, he holds a Bachelor of Laws (LLB) from Bharati Vidyapeeth University, Pune.

He is handsome and he knows it. Right from toping the Times Most Desirable Men on Television 2017 list to hosting Asia’s Got Talent and Indonesian reality show, Panah Asmara Arjuna, he is a sensation.

That's it, guys! These are some of the less talked about facts about the alluring hunk. Reportedly, he and his wife Ruchikaa have been approached to be a part of the dancing reality show Nach Baliye 10. Lastly, Happy Birthday, Shaheer Sheikh. Stay tuned!

(The above story first appeared on LatestLY on Mar 26, 2021 08:40 AM IST. For more news and updates on politics, world, sports, entertainment and lifestyle, log on to our website latestly.com).