Sidharth Shukla Fan Asks Him To Kiss Shehnaaz Gill In an Instagram Live Session And Their Reaction Is Cute! (Watch Video) 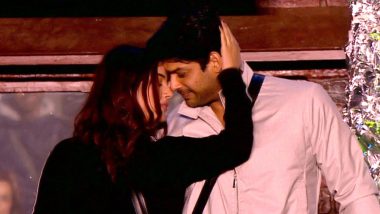 Bigg Boss 13 winner Sidharth Shukla's bonding with co-contestant Shehnaaz Gill is known to every fan. They showed a fun and flirty rapport through out the reality show stint. This made fans root for them in the real life as well and even asked them to get married! They maintained that they are 'just friends' and did music video together too. However, SidNaaz fans can never get enough of them! Can they? Recently, one such die hard fan asked Sid to kiss Shehnaaz and their reaction was hilarious and cute! Bigg Boss 14 First Promo OUT! ‘Farmer’ Salman Khan Is Back and He Promises to Change 2020 for Good! (Watch Video).

In an Instagram live, the BB stars addressed their fans questions and comments. Their admirers were too excited to see them together after a long one such die hard fan asked Sid to kiss Shehnaaz and their reaction was hilarious and cute!time. The delightful part was that they share the spark that they did in the house and fans were happy! Sid read a message where a fan asked him to kiss her and they agreed to it in jest. They also promised to keep each other's company through out life! Check out the video below.

Speaking of the show, Bigg Boss 14's first promo is already out! Host Salman Khan said in the first glimpse that things are going to change in this season! The show is reportedly going by the lockdown theme. Time to see whether the reality show gets a similar response as BB 13. Stay tuned!

(The above story first appeared on LatestLY on Aug 09, 2020 01:17 PM IST. For more news and updates on politics, world, sports, entertainment and lifestyle, log on to our website latestly.com).