Bigg Boss 14 First Promo OUT! ‘Farmer’ Salman Khan Is Back and He Promises to Change 2020 for Good! (Watch Video) 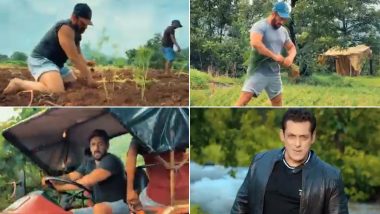 The First Promo of Bigg Boss 14 Featuring A 'Farmer' Salman Khan is Out! (Photo Credit: Twitter)

The year 2020 has been really bad for the entire world, and even Bigg Boss knows that! So they have come up with the first promo of the upcoming season with Salman Khan back as the host. Looks like Salman Khan had now brought his favourite new pastime - farming - to the show as well, as seen in the first teaser of the popular reality show. This will be the 14th season of Bigg Boss that continues with its plan ahead despite the country in lockdown over COVID-19. It does make sense since the whole show is about putting people in a lockdown in a house! Bigg Boss 14: Panipat Fame Sahil Salathia Reveals He Was Approached For Salman Khan’s Controversial Reality Show but Turned It Down, Reveals Why.

So what happens in the promo? Salman Khan is seen farming in the promo, taking real footage from his Panvel farmhouse, including the viral video on him driving a tractor. He is heard saying that the year 2020 had put a speed-breaker in everyone's lives so now he is stuck with sowing rice. We seen him shaving his stubble off and then he returns in his trademark black Bigg Boss attire. Salman looks at the camera and promises that things are going to change!

Watch the Promo Below:

The promo doesn't mention when Bigg Boss 14 will be coming, except that 'coming soon only on #Colors'! Bigg Boss 14: Filmmaker Onir Is Absolutely Clueless About the News of Being a Contestant of Salman Khan’s Reality Show.

The shortlisting of contestants for the next season of Bigg Boss 14 has been going for a while, and while we have been hearing some popular names, nothing has been confirmed yet. The previous season of Bigg Boss was won by television actor Sidharth Shukla, while model Asim Riaz was the runner-up.

(The above story first appeared on LatestLY on Aug 08, 2020 10:40 PM IST. For more news and updates on politics, world, sports, entertainment and lifestyle, log on to our website latestly.com).