The upcoming season has been called the best one yet. Reviews are particularly praising the highly ambitious story, as well as the cast, who are said to be at the top of their game. 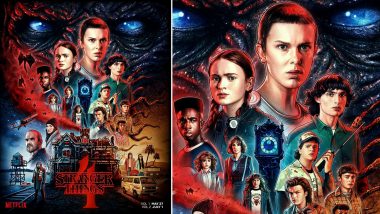 Stranger Things Season 4 has been in development for the last three years now. With the reports of every episode being at least an hour long, with some of their runtimes even being longer than that of some movies, the upcoming season is shaping up to be something extremely special. It looks like Duffer Brothers and team have knocked it out of the park once more, as the first few reviews for it have been extremely positive. Stranger Things Season 4: Millie Bobby Brown’s Eleven Has Lost Her Powers in the New Clip From the Upcoming Netflix Show (Watch Video).

The upcoming season has been called the best one yet. Reviews are particularly praising the highly ambitious story, as well as the cast, who are said to be at the top of their game. So with that being said, let's take a look at some of the reviews for Stranger Things Season 4. Stranger Things Season 4 Volume 1 Eight Minutes Clip Out and Fans of the Netflix Show Can Watch It Right Here! (Watch Video).

TechRadar: After a nearly three-year wait, Stranger Things season 4 makes good on its promise by delivering an absorbing, action-packed, and horror-fuelled entry that's bursting with revelations aplenty. It's a hugely ambitious gamble – story-wise, at least – that largely pays off, even if it's not without its plot pacing and slight genre-hopping issues. Diehard and casual fans will lap up what's on offer, though, from the series' most mature, thrilling, and poignant installment yet.

CNET: Stranger Things aired its third season way back in 2019, before the coronavirus pandemic. Its return lands in a very different world where viewers, like the Hawkins kids, have been forced to battle a deadly enemy no one completely understands. Like Tiger King, bread baking and dalgona coffee in those early pandemic days, the show is a balm, a distraction and a comfort. It's heartening that it's still so rich and well-done four seasons in. We needed this.

Empire: This time, it’s taken up a notch with extra filmmaking flair — most evident in the camera swinging seamlessly into the Upside Down, and an impressive out-of-the-blue one-take shootout — and tying in timely themes like the Satanic Panic, Vietnam aftermath and increased Cold War hostilities. If you’re looking for evidence of the Duffers’ grand plan going into the fifth and final season, it hasn’t come to light just yet — but that doesn’t make the journey any less entertaining.

ComicBook.com: Longtime fans may be left underwhelmed and unimpressed with the initial episodes of this season, yet with Episode 4, everything finds its stride to deliver everything fans have been waiting three years for, and then some. Whatever the future holds for Stranger Things, we're holding out hope for Hawkins, as Season 4 mines its horror veins for all they're worth and dives even deeper into the unsettling arenas of the Upside Down.

Variety: It helps, too, that the new Hawkins beast — which Dustin accurately calls out as a Freddy Krueger facsimile — feels more tactile and viscerally frightening as he preys on teen trauma. The so-called “Vecna” does have a (very cool) explanation, but before that, it’s also just an effectively creepy monster of the week that brings new undead life to the Upside-Down. In fact, for as interesting as the eventual reveals are, it’s downright jarring to realize that there’s going to be a whole other season beyond the second part of Season 4.

Stranger Things Season 4 premieres on May 27, 2022 and will stream exclusively on Netflix.

(The above story first appeared on LatestLY on May 23, 2022 01:01 PM IST. For more news and updates on politics, world, sports, entertainment and lifestyle, log on to our website latestly.com).