Some of the stunts were a bit difficult, but Mika Singh's execution was flawless. There are a few surprises in it for the audience, so keep a look out for them." 'Swayamvar - Mika Di Vohti' will be airing soon on Star Bharat. 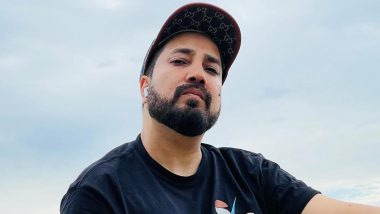 As Mika Singh is all gearing up for his new show 'Swayamvar - Mika Di Vohti', rapper Kuwar Virk, popular director Sumit Bharadwaj and stunt director Sahil have teamed up with him for the upcoming music video shoot for the title track of the show. Kuwar Virk has previously worked with Mika Singh, on his first track and other projects. Swayamvar – Mika Di Vohti: Singer Mika Singh To Look for a Life Partner on Star Bharat’s Reality Show (Watch Promo Video).

He says: "I have always had so much fun working with Mika Paji on my previous tracks. So, I knew that our chemistry will create magic once again! To be honest, this was a unique opportunity for me and I love the concept, and it's for Mika Paji's Swayamvar, so I wanted to be involved."

Sumit Bharadwaj, who worked with Mika Singh earlier in a music video 'Majnu 2', talks more about the show and says: "It is always such a pleasure to work with Mika Singh. He brings so much character to the whole working environment and we love his energy. We recently shot the music video and it was such a special experience with so many people who contributed to its making." Sahil, on the other hand, is excited to work with Mika. Swayamvar – Mika Di Vohti: Mika Singh Reveals He’s Ready To Search for His Perfect Match at the Reality Show.

He went on saying: "Mika Singh insisted on doing his own stunts and that is something I admire about him. He worked very hard to make this project a great success and we all helped him achieve his best. Some of the stunts were a bit difficult, but Mika Singh's execution was flawless. There are a few surprises in it for the audience, so keep a look out for them." 'Swayamvar - Mika Di Vohti' will be airing soon on Star Bharat.

(The above story first appeared on LatestLY on May 09, 2022 07:44 PM IST. For more news and updates on politics, world, sports, entertainment and lifestyle, log on to our website latestly.com).