As per the latest reports, Neha Mehta aka Anjali from TMKOC has said goodbye to the sitcom. Check it out. 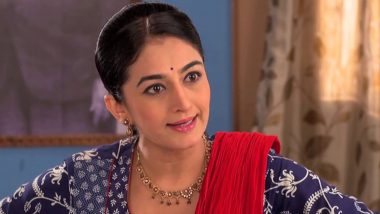 Taarak Mehta Ka Ooltah Chashmah, the comedy show on SAB TV completed 12 years of success on July 28, 2020. While that's indeed a piece of good news, there's a not-so-good gossip with regards TMKOC. Well, after Disha Vakani aka Dayaben saying goodbye to the show, reports are that Neha Mehta who plays the role of Anjali Bhabhi on the serial has also quit the show. As per a report on Spotboye, Mehta has conveyed the message of not returning to the show to the makers and has been not coming to sets from the time the shooting of the serial has resumed. Bigg Boss 14: Munmun Dutta aka 'Babita' From Taarak Mehta Ka Ooltah Chashmah Is NOT a Part of Salman Khan's Show (View Post).

This updates from the TMKOC is heartbreaking for fans as Neha Mehta has been part of the show since it's inception. For the unaware, she portrays the role of Anjali, wife of actor Shailesh Lodha (Tarak Mehta) who happens to be a dietician. Mehta's character on the serial always tells her husband Tarak to consume healthy food and must say the banter between the two is quite fun to watch. However, if the above news is true, fans will not see Taarak Mehta and Anjali in a single frame anymore. Jethalal Funny Memes That Will Make Even Taarak Mehta Ka Ooltah Chashmah’s Dilip Joshi Laugh Out Loud.

Here's A Happy Picture Of The Actress:

While the rumours of Neha bidding adieu to the show is strong, nothing has been confirmed by the makers or the actress yet.  Earlier to this, reports of Gurcharan Singh aka Roshan Singh Sodhi quitting the show had also made headlines. However, later on, the show's producer, Asit Modi had refuted the speculations. Stay tuned!

(The above story first appeared on LatestLY on Jul 29, 2020 11:46 AM IST. For more news and updates on politics, world, sports, entertainment and lifestyle, log on to our website latestly.com).