Right now, Twitter is flooded with fans celebrating Sam Wilson as the new Captain America. And why not? The MCU fans have been waiting for this moment, and finally, it's here. Check it out. 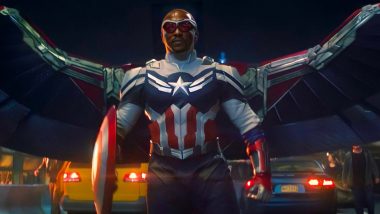 There's a new Cap in town! Yep, you read that right. The moment fans of the Marvel Cinematic Universe (MCU) have been waiting for is finally here. As in the finale episode of The Falcon and the Winter Soldier, the new Captain America takes to the skies and indeed, it's the most amazing scene from the series yet. Well, sorry for the spoilers for the ones who haven't watched the episode, but we are writing this as netizens can't keep calm. FYI, it is Sam Wilson (Anthony Mackie) who is the new Cap America. The Falcon and the Winter Soldier Episode 5 Mid-Credit Scene Explained: Is John Walker Becoming Super-Patriot? Here’s Why We Think So! (SPOILER ALERT).

RN, Twitter is flooded with fans celebrating Sam as the new shield man. And why not? The MCU fans have been waiting for this moment, and finally, it's here. Right from sharing videos from the iconic scene to going all aww at the ending scene between Isaiah Bradley and Sam Wilson, netizens are going all crazy. Check out their reactions below. The Falcon And The Winter Soldier: Sam Wilson As Captain America And Julia Louis-Dreyfus' Cameo Make MCU Fans Super-Happy.

no super serum. no blonde hair and blue eyes.

i am captain america. pic.twitter.com/CxjcCyPZZZ

Insane Is The Word!

Love the Suit by the way. Those were just some of my very minor complaints and first initial thought when seeing it, again after a while I got used to it, and it looks absolutely stunning. #CaptainAmerica pic.twitter.com/ubCgaDpSFC

For the unaware, The Falcon and the Winter Soldier episode 6 released on Friday, April 23 at 12am PT/ 8am GMT/ 12:30pm IST/ 5pm AEST on Disney+ and Disney+ Hotstar. So, what do you think about the new Captain America? Tell us in the comment section below. Stay tuned!

(The above story first appeared on LatestLY on Apr 23, 2021 03:40 PM IST. For more news and updates on politics, world, sports, entertainment and lifestyle, log on to our website latestly.com).