The Falcon and the Winter Soldier Episode 5 Mid-Credit Scene Explained: Is John Walker Becoming Super-Patriot? Here’s Why We Think So! (SPOILER ALERT)

In a first for The Falcon and the Winter Soldier, episode 5 arrives with a mid-credit scene. And it shows where the last episode is planning to take John Walker's character ahead. 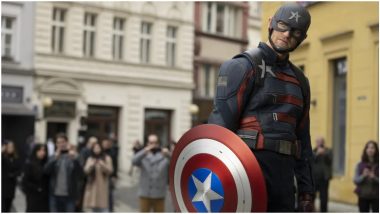 John Walker in The Falcon and the Winter Soldier (Photo Credit: Disney+)

Marvel is just going from strength to strength just like The Falcon and The Winter Soldier is also going from strength to strength with each episode. The fifth episode has recently started streaming on Disney+ Hotstar, and it is the longest episode of the Kari Skogland- directed Marvel series till now. In the last episode, we saw how the new Captain America, John Walker (Wyatt Russell), murders one of the Flag Smashers with Cap's Shield, after his friend Lemar (Clé Bennett) is killed by Karli (Erin Kellyman). That he does in full view of the public, who capture the crime on their phones, only adds to the gravitas of his wrong-doing. The Falcon And The Winter Soldier: Sam Wilson As Captain America And Julia Louis-Dreyfus' Cameo Make MCU Fans Super-Happy.

While Sam Wilson aka Falcon (Anthony Mackie) and Bucky (Sebastian Stan) takes the Shield away from him after an intense three-way fight, the US government denounces his actions and removes him from military service and as Captain America. Later, he is met by Countess Valentina Allegra de Fontaine (Julia Louis-Dreyfus), who instigates him to not leave the path of what he has been on. Of course, there is still that super-strength serum in his veins that is making Walker more and more demented, much to the dismay of his wife.

Towards the end of the episode, Sam Wilson decides to accept Cap's legacy on his own, and trains himself to wield the Shield. It looks like he is all set to Captain America now, though we are curious to know what's in the box that Bucky gave him, a favour he took from Wakandans for giving them Zemo (Daniel Bruhl, is this the last we see of him?). Is that a new Wakandan Captain America suit? Before we get the answer, the episode ends on a tantalising cliffhanger.

In a first for The Falcon and the Winter Soldier, episode 5 arrives with a mid-credit scene. And it shows where the last episode is planning to take John Walker's character ahead.

Having been ditched by his government and stripped of his Captain America persona, John Walker is not willing to let go off what has been his new identity. In the mid-credit scene, we see him take the Tony Stark way and makes his own Captain America suit and Shield. Whether the Shield is made of vibranium or not is not clear enough, and I am also curious as to what Contessa meant by the grey area involved about the ownership of the Cap's shield in her earlier conversation. Does that mean the Shield was seen as a patented work not meant to be replicated, but can actually be done so?

What Does the Scene Imply?

Marvel comics readers know John Walker more by his popular superhero name, US Agent. He is seen as the alternative to Captain America, after Steve Rogers retires, wearing a similar costume and shield, but he is brasher, stubborn and arrogant. Thus making US agent more of an anti-hero than a hero. The Falcon and The Winter Soldier: 5 Important Easter Eggs That You Should Not Ignore From The First Three Episodes!

The Falcon and The Winter Soldier, however, takes a slightly different route with the character. While he retains the traits of US Agent from the comics, John Walker is only referred to as Captain America in the series, that is, till the fifth episode. Interestingly, for a brief period, even Marvel Comics did that to his character.

However, the mid-credit sequence changes things up. First, we though that Walker might become US Agent finally, but it looks like the series is making him go back to the identity of how he first appeared in comics - Super-Patriot.

Super-Patriot is a super-villain in the Marvel comics who made his debut in the issue Captain America #323. He was seen as this opposite to Cap's goody-two shoes persona. While he wears his patriotism on his sleeves, Super-Patriot will go to any lengths to prove his 'patriotic duty' to the country. In these times of overzealous toxic nationalism, Super-Patriot becomes an even more relevant figure. Even though he doesn't own a shield, MCU would be merging both US Agent and Super-Patriot persona into their John Walker, as he heads for what could be a very bloody vendetta spree.

On a separate note - let's give a round of applause to Wyatt Russell, whose performance highling the conflicted mind of Walker is one of the strong points of what has been an incredible episode.

(The above story first appeared on LatestLY on Apr 16, 2021 03:15 PM IST. For more news and updates on politics, world, sports, entertainment and lifestyle, log on to our website latestly.com).