The Kapil Sharma Show To Go Off Air? The Actor-Comedian Finally Reveals The Truth

The Kapil Sharma Show is indeed going off-air but it isn't all bad news. Kapil Sharma during an AMA session revealed that the show is taking a break. So in all probability, the show will be back again for its fans. 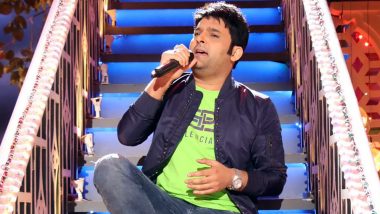 There have been a lot of reports on The Kapil Sharma Show going off-air. Some of them claimed that since it has no live audience due to COVID-19 restrictions and stars aren't coming to his show due to the non-release of movies at the theatres, the channel apparently had decided to pull the plug. But finally, all the speculations can come to rest as Kapil Sharma has himself dismissed the report. However, even after that, you may not be able to see the new episodes of the show for a while. The Kapil Sharma Show: Anil Kapoor Reveals He Offered 24, Mubarakan and More Projects to Kapil but the Latter Rejected It (Watch Video)

Kapil did an AMA session on Twitter requesting his fans to ask anything they would want to know. It was obvious that somebody would address this concern of many TKSS fans who were a bit rattled by the news of the show going off-air. Sharma admitted that the show is taking a break.

Only a small break https://t.co/GAbmq83OQf

Sharma even reasons it why

Bcoz I need be there at home with my wife to welcome our second baby 😍🧿 https://t.co/wdy8Drv355

Kapil and his team were perhaps some of the early people who started shooting post the lockdowns eased out. The team often shared videos and pictures of the new normal where PPE kit clothed makeup artists are making them look good in front of the camera.

(The above story first appeared on LatestLY on Jan 28, 2021 04:34 PM IST. For more news and updates on politics, world, sports, entertainment and lifestyle, log on to our website latestly.com).