Tiger King: Everyone, Including Kim Kardashian Is Shocked by This 'Crazy' Netflix Docu-Series (Read Tweets) 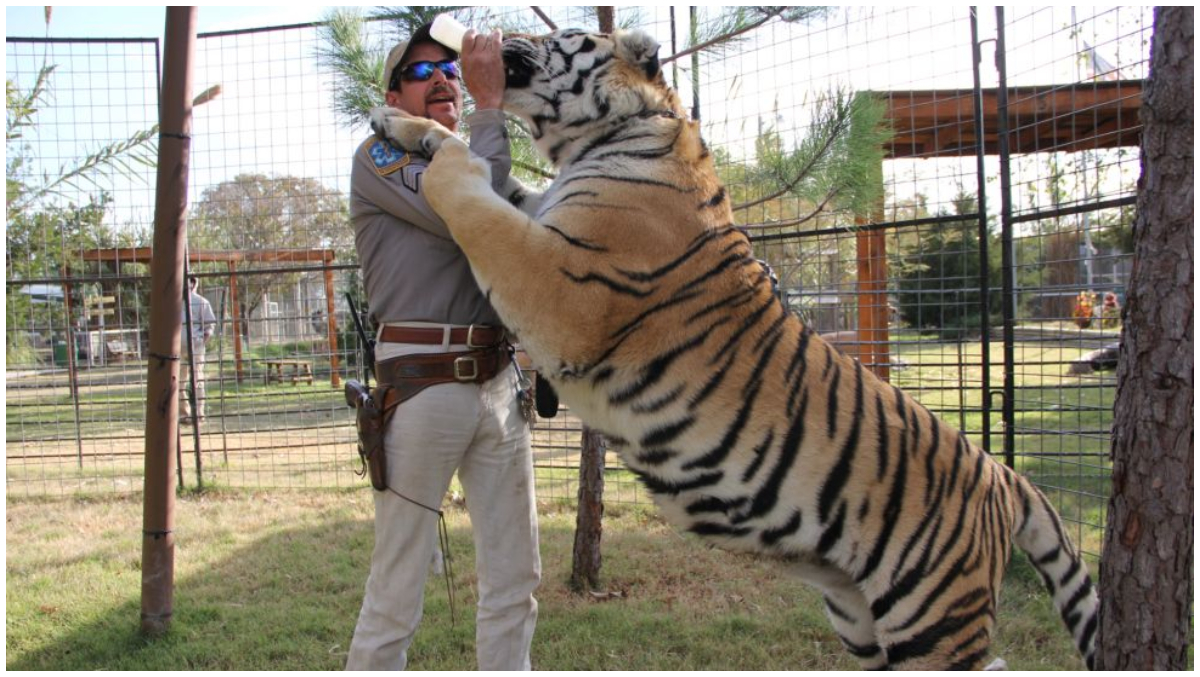 We all are quarantined. We all are looking for recommendations on movies, series, books and music. Well, here is one Netflix product that the internet has been talking about non-stop now. Tiger King. Full title -- Tiger King: Murder, Mayhem and Madness. The series is about Joe Exotic, the owner of G.W. Zoo, and Carole Baskin, animal activist, who are always at loggerheads. The seven episodes of the series have hundreds of tigers, murder plots, deaths, drugs, polyamory, music and just absolutely bizarre, shocking things, as per the internet. Even Kim Kardashian tweeted to call it 'crazy'. She: Vijay Varma Is Intrigued by the Fact that Imtiaz Ali is the Creator of Netflix's Hard-Hitting Series.

This won't be the first time the world has gone gaga over a docu-series. We were left absolutely stunned by Wild Wild Country, Don't F**k With Cats: Hunting an Internet Killer, and Making a Murderer. But the reactions to Tiger King are peculiar. The show is being perceived something as... "like watching Animal Planet, ID Discovery, A&E Biography, and Live PD all rolled into one", as put nicely by one Twitter user. Extraction: Chris Hemsworth Will Not Be Coming to India To Promote His Netflix Film Over Coronavirus Danger.

Here are what the others are saying about the show:

Has anyone seen Tiger King on Netflix?!?! It is crazy!!!!

Kim Even Took Part In Conspiracy Theories About The Show

Wow the amount of texts I’ve gotten about Tiger King since I tweeted about it all have mentioned their belief that Carol killed her husband! What are your thoughts? Do you think Carol killed him?

I know people say this a lot about movies and shows.

But “Tiger King” is the single craziest docuseries I’ve ever seen.

anyone else watching Tiger King and going insane or

At least we have “Tiger King.”

And this one we quoted earlier

#TigerKing This is like watching Animal Planet, ID Discovery, A&E Biography, and Live PD all rolled into one. #TigerKingNetflix pic.twitter.com/lrelZdJ4Wp

How Petty Can You Be?

Y'all I have no choice but to stan Joe cause I never seen this level of petty in my life #TigerKing pic.twitter.com/87VwwF8laY

So, that amounts as a lot of noise for one TV show. Twitter is bustling with memes and jokes about the show, which we have kept away from this feature lest they spoil the show. Netflix's Tiger King is certainly the unanimous suggestion from Twitter at the moment. In this era of social-distancing, we are going to come across more of such gems soon.