Unpaused releases on Amazon Prime Video today and is a bouquet of stories during the lockdown. While the stories do manage to warm your heart, the formulaic eventuality of each of them mires the experience. 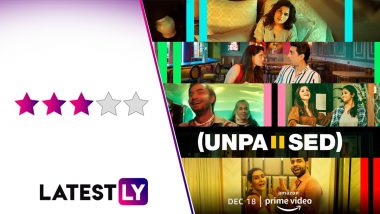 Unpaused movie review: When COVID-19 forced India to stay at home with back-to-back lockdowns, I knew filmmakers would incorporate this existential crisis in their narratives. Unpaused attempts to put forth a bouquet of myriad stories about love, hope, despair, agony, abandonment, loneliness and unusual friendships. In most accounts, the movie manages to warm your heart and then it doesn't. ‘Unpaused’ Explores Happiness and Hope Amid COVID-19, Say Cast and Crew

The first story is called Glitch and is futuristic, showing a world, 12 years later, still struggling with coronavirus but this time it's called COVID-30. A hypochondriac Ahan (Gulshan Devaiah) goes on virtual dates and his 193rd match is Ayesha (Saiyami Kher). During their meet at a VR cafe, things go well till Ayesha being a COVID warrior becomes a deal-breaker. The second one is called Apartment where Devika (Richa Chaddha) is planning to kill herself after her husband is accused of sexual harassment in a magazine they both run. The third feature is called Rat-A-Tat where a senior citizen Archana (Lilette Dubey) forms a reluctant bond with a young neighbour played by Rinku Rajgur, then comes Vishaanu where the story of a migrant labour and his family are shown in a completely different light and the last is Chaand Mubarak, a story about helping each other out in tense times, starring Ratna Pathak Shah and Shardul Bhardhwaj.

Glitch is directed by Raj and DK, perhaps the most contemporary director-duos of India now. The quirks in the tale are their trademarks which one can find in all their movies. The part where Ayesha is praised and appraised on social media for being a warrior but is ostracised by people in reality has been beautifully depicted. Reshu Nath's writing weaves the part so smartly in the tale that it isn't in your face and is said in a matter-of-fact way. Yet it leaves a mark. The Artificial Intelligence Mala is funny but it did remind me of a recently concluded Korean Show called Start-Up which also had a similar artifical intelligence at play. The person behind the voices are revealed in both of them, coincidence much?

The Apartment is directed by Nikhil Advani and speaks about sexual harassment. It did come to my mind once during the peak of lockdown about how are these sexual offenders faring now that they can't do their thing virtually. Although the feature doesn't really tell you when actually the incidents happened since it focuses on the aftermath, Devika does ask the same question to her husband played by Sumeet Vyas. It's a good story about saving a person trying to end his/her life. What's so aptly depicted is how a man tries to dump the blame on the women for all his shortcomings. But it's not something that we haven't seen before and that's where the segment fails to become The One! Unpaused Trailer: Richa Chadha, Gulshan Devaiah, Lillete Dubey, Abhishek Banerjee, Ratna Pathak Shah’s Anthology Film Promises To Be ‘Unfiltered, Unexpected And Unforgettable’ (Watch Video)

Rat-A-Tat is directed by Tannishtha Chatterjee and talks about senior citizens during the lockdown. It definitely warms your heart to see an elderly woman staying alone reluctantly opening up to a very young neighbour. But the segment would have been even more poignant if it had continued with Lilette Dubey's abhorrence towards people some more, which only got aggravated due to the social distancing. Instead the segment moves towards a formulaic evolution of a friendship between two contrasting personalities. That makes it quite drag.

Watch the trailer of Unpause here

Vishaanu, directed by Avinash Arun Dhaware, takes a very different and refreshing take on migrant woes during the lockdown. Rather than focusing on their despair, hurt and struggle on foot to reach their villages, it tried to throw some light on life just before that eventuality dawned on them. While they struggled to look for a way to reach home, three people sneakily staying in a sample flat in a high-rise is such an unlikely way of appraoching their story. That's exactly what makes it stand out. 'Jo shehar roti de wohi achi hai' line summarises their entire life's trajectory.

The clincher however is the couple making Tiktok videos in the night. That also shifts your attention towards some lax writing. For a person who doesn't let his son stand in the balcony fearing somebody will spot them, never thinks twice before shooting and uploading tiktok video inside the flat. Seems a bit far-fetched!

Chand Mubarak by Nitya Mehra tries to mix a bit of religion and conscience without making anything preachy.  Before I go further, let me say this that convo between an auto rickshaw driver and a single female passenger about marriage do happen. Nothing fictional there! But here too, like in Rat-A-Tat,  the whole point of showing how senior citizens, the high-risk group, feel about this sudden urgency to keep them away from anything remotely suspicious in the wake of the pandemic gets lost in the narrative. Had that been the core, Chand Mubarak would have been a class act.

With some really incredible actors in the cast, all the segments have amazing performances. The stand out ones are of course Abhishek Bannerjee and Geetika Vidya Ohlyan in Vishaanu and Gulshan Devaiah in Glitch.

There won't be any reason to hit the pause button on Unpaused when you stream it on Amazon Prime Video. But the formulaic approach could be a deterrant.

(The above story first appeared on LatestLY on Dec 18, 2020 12:30 AM IST. For more news and updates on politics, world, sports, entertainment and lifestyle, log on to our website latestly.com).