more to riff on. With so many questions and thoughts surrounding Evan Peters' cameo, WandaVision has built up a huge amount of hype and speculations, as we go into its sixth episode next week. In this feature, let's break down the biggest twist in WandaVision and decode what it means for the Marvel fans when it comes to Phase 4 and 5 of the franchise. 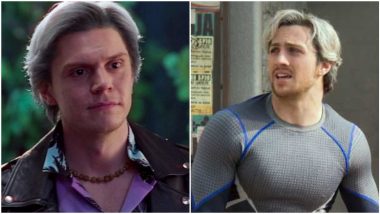 Marvel fans would have been quite shocked at the way how the latest episode of WandaVision ended, dropping a huge (almost) unexpected cameo. Expecting that you have seen the show by now, since we are delving into SPOILERS, the episode's final scene has Vision (Paul Bettany) having a quarrel with Wanda (Elizabeth Olson), after realising that she is manipulating reality and mind-controlling Westview residents to be part of her 'sitcom'. As their fight gets thicker, their doorbell rings. Vision asks if Wanda has manipulated that sequence, to which she says that not everything that's happening is within her control. WandaVision Episode 5 Explained: From Wanda Facing Off SWORD to That Awesome X-Men Cameo, 10 Things That Happened in Marvel’s Disney+ Show.

When she opens the door, we are given a feeling that it is someone that even surprises her. The back of the caller's head resembles her dead twin Pietro Maximoff, who was killed in the climax of Avengers: Age of Ultron. Since he was name-dropped by Monica Rambeau in the third episode, we had an inkling that Pietro (known as Quicksilver in Marvel comics) will make some kind of return in the series. While that did happen, Marvel pulled off a bigger rug-pull in the particular choice with the casting, that leads to some very interesting implications in the future.

In this feature, let's break down the twist and decode what it means for the Marvel fans when it comes to Phase 4 and 5 of the franchise.

In Age of Ultron, the speedster was played by Aaron Taylor-Johnson, who played the second half of the Sokovian twins, first being Wanda, both getting special powers from Loki's sceptre. He was killed when trying to save Jeremy Renner's Hawkeye from a barrage of bullets showered by Ultron.

Since then, Wanda has never mentioned his name again or drop any reference, until the third episode of WandaVision. It is as if she wants to block away the pain of losing her dear sibling. Like us, even she was surprised when he rang her door-bell, and even more, when he turns out to be not Aaron Taylor-Johnson.

We can also say that Darcy Lewis spoke for all of us, when she exclaims, "Wanda recast Pietro?", the moment we saw Peters at the door-step. Fans of the X-Men First Class quadrilogy knows that Evan Peters played Quicksilver in Days of Future Past, X-Men: Apocalypse and Dark Phoenix. He was regarded as one of the most entertaining elements of the series, with "Time in a Bottle" sequence in Days of Future Past being the best scene in the whole franchise.

Peters' character is shown to be the son of Magneto (Michael Fassbender), though the latter wasn't told about this. In Days of Future Past, he is shown having a mother and a little sister, who fans presumed to be Wanda. However, the below scene from the film's extended cut shows that he also has another sister who is never seen, which we imply to be Wanda:

So why is an X-Men character masquerading as an MCU character in WandaVision? Before we get into that, let's look back at how we have two Pietro's running around. WandaVision Episode 5: Twitterverse Is Going Mad Over A Surprise X-Men Character Turning Up on the Marvel Show!

Before Disney bought Fox, the two studios had their roster of Marvel Characters. Fox had the rights of X-Men and Fantastic Four, while Disney retained most of the other characters (Spidey is still with Sony, with studios coming to a shared agreement). But there are some characters that the studios both had rights to, which includes the Maximoff twins.

So when Joss Whedon, basking in the success of 2012's The Avengers, wanted to have the Maximoff twins in Avengers: Age of Ultron, Marvel allowed him to have that.  However, Marvel couldn't use the word 'mutant' due to copyright issues, so they merely were super-powered beings in the film. Around the same time, Fox introduced Quicksilver in Days of Future Past, so fans now have two versions of the character in two franchises. However, Marvel made it easier to clear the confusion when Pietro dies in AoS, making Peters' Quicksilver more scope to shine. It is another matter that X-Men franchise couldn't make full use of the character. Especially in Dark Phoenix. Dark Phoenix Review: 7 Things That Went Wrong in X-Men’s Last Film That Ruined the Experience for Us!

Well, after Disney bought Fox, and the X-Men saga ended with Dark Phoenix, and later, the much-delayed, New Mutants, Marvel fans were expecting X-Men to be reintroduced in MCU. There was a problem, though. In MCU, we had an Earth that only knew Avengers and respected them, and are clueless about mutants. If you are a fan of X-Men franchise, you know that mutants are seen with caution and even derision by the non-mutants, that is the rest of humanity, so much that many of them don't want to be mutants anymore, while some like Magneto want to rebel against this attitude and make mutants the supreme beings. MCU didn't offer such a world for X-Men to thrive in.

However, while announcing the Phase 4 slate, MCU chief Kevin Feige dropped a big hint that mutants will be part of their cinematic journey. A later announcement that a Fantastic Four movie is on the way, was a good indication that we can have X-Men share space with Avengers. And with Evan Peters making an appearance in WandaVision, that could mean...

The biggest indication of this casting is that we are now knowing a world that has X-Men in it. How you say? With Wanda creating an alternate reality for herself, and the upcoming Doctor Strange (and possibly Spider-Man) movies dealing with multi-verses, Marvel could be warming up fans to the idea of multiple universes, where in one particular universe, Earth might be populated by X-Men instead of Avengers. And what we have seen in Fox's X-Men franchise till now could be set in that universe.

By either the machinations of Wanda, or as fans are theorising, the unintroduced demon Mephisto (who had a huge role to play in House of M comic line that is a part inspiration for WandaVision), Evan Peters' Quicksilver have somehow managed to enter this reality and take place of Aaron Taylor-Johnson's Pietro.

The implications of this not only means that we can see X-Men soon in MCU, but Feige can also adapt the famous X-Men vs Avengers comics for an upcoming Avengers movie. Who wouldn't be thrilled to see the Hulk battling Wolverine in a movie?

... While Evan Peters' appearance had left us excited, we have to see this casting with some caution. MCU is known to play with fan expectations, by not exactly pandering to their desires. Remember how Mandarin in Iron Man 3 turned out to be a drunken, washed out British actor? Or more recently, Mysterio in Spider-Man: Far From Home promised multiple universes, only for him to turn out to be a conman, a disgruntled former employee of Stark Industries who was faking it all.

So we have to take Peters' casting with a grain of salt. It might not exactly mean that he could be playing the same character from the X-Men franchise. There is a possibility that he could be just another random character who is trapped in Wanda's world. Or maybe he himself is Mephisto, who knows?

The reason to think this way is because if Peters is recast as Pietro, that also means that Marvel would also need to rehire the rest of the X-Men actors. Hugh Jackman (Wolverine) and Jennifer Lawrence (Mystique) have already given up on the series, while there would be confusion as to whether Patrick Stewart needs to be brought as Professor X, or James McAvoy. Similar with the case of Michael Fassbender and Sir Ian Mckellen. Rest assured, that the next time we have a Deadpool movie, Ryan Reynolds will have a lot more to riff on.

With so many questions and thoughts surrounding Evan Peters' cameo, WandaVision has built up a huge amount of hype and speculations, as we go into its sixth episode next week. By then we would hopefully get to know the actual implication of this casting, and if we can say 'mutants' in this universe. BTW, when Monica says she known an aerospace engineer, did she mean 'Reed Richards' aka a certain Mr Fantastic?

(The above story first appeared on LatestLY on Feb 05, 2021 10:59 PM IST. For more news and updates on politics, world, sports, entertainment and lifestyle, log on to our website latestly.com).