Actor Jim Sarbh is gearing up to judge a contest called Young Earth Champions that is teamed around the earth conservation and protection of green carpets. 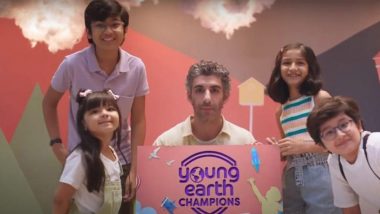 Actor Jim Sarbh is gearing up to judge a contest for children titled Young Earth Champions that is teamed around the earth conservation and protection of green carpets. Engaging with young minds and encouraging them towards a sustainable tomorrow, Sony BBC Earth is bringing the second edition of the show. The contest is all set to create a competing ground for students from the 6th to 9th grade with renewed vigour and passion. The theme for this year is relevant to the conversations ranging around the need for conservation'. Dil Beats 4: Sukriti Kakar and Prakriti Kakar Are All Set To Host the 4th Season of the Show (Watch Video)

Jim Sarbh will also play an important role in judging the entries. The top 10 winners will stand a chance to virtually interact with Jim and the professor on their ideas and exchange thoughts about sustainability. Talking about the show, Jim said, "I think learning to live with our environment in a more sustainable manner is really our only option for survival. A reverence for life in general, and not merely a selfish, myopic human perspective, would really change how we treated all living things on this planet. I believe education is the place to start, and so I am glad for Sony BBC Earth taking the initiative with some of our country's youth." ABC Entertainment President Craig Erwich Says They Are Open to Having Chris Rock Host the … – Latest Tweet by Pop Crave.

Rohan Jain, from Sony Pictures Networks mentioned, "We believe that the youth of today are observant, aware, and environmentally conscious. We launched Young Earth Champions last year and received a phenomenal response to the contest. With this property, we aim to provide these young minds a platform to showcase their innovative ideas. As we announce our second edition with Jim Sarbh, we aim to set newer benchmarks and hope to inspire more kids to adopt a solution-oriented approach."

The month-long contest will be evaluated by the IIT-Bombay experts from the Department of Environmental Science and Engineering headed by Professor Amritanshu Shriwastav. The one with the most innovative idea will be named the Young Earth Champion along with receiving a mega prize and a once-in-a-lifetime opportunity to be featured on Sony BBC Earth.

(The above story first appeared on LatestLY on May 19, 2022 10:48 PM IST. For more news and updates on politics, world, sports, entertainment and lifestyle, log on to our website latestly.com).