Bandh in Punjab on April 2: Public Transport, Schools, Internet Services to Be Shut as Several Dalit Organisations Call For Bandh Against SC/ST Act

According to recent reports, all educational institutions to remain closed in wake of the band. Also, mobile Internet services will be suspended in the state tomorrow in the wake of bandh called by several Dalit organisations against the amendment under the SC/ST Act. 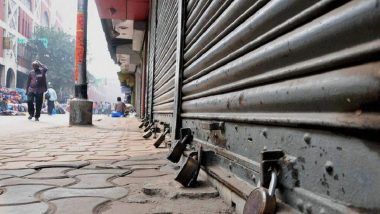 Chandigarh, April 1: The Punjab Government on Sunday informed that all public transport services across the state will be suspended on April 2, 2018 in wake of the 'bandh' called by several Dalit organisations. The government has urged people to make their travel plans accordingly. As per reports, several Dalit organisations in the state have called for a bandh against the amendment under the SC/ST Act.

A spokesperson of the Punjab government said schools will remain shut and buses off the road tomorrow. Internet services in the state will remain suspended from 5 pm today till 11 pm tomorrow in a bid to check rumormongering on social media.

Reports inform that security forces conducted flag marches at some places in the state today as a precautionary measure. The orders were issued after Chief Minister Amarinder Singh reviewed the security arrangements with top police and administration officials in the evening.

About 4000 police personnel along with one company of Rapid Action Force to be deployed tomorrow across the state. "Strict action will be taken against those who indulge in violence", Commissioner of Police, Ludhiana was quoted by ANI over bandh called by several Dalit organisations in Punjab tomorrow.

What will be affected because of the Bandh:

Punjab: All educational institutions to remain closed and mobile Internet services to be suspended in the state tomorrow in the wake of bandh called by several Dalit organisations against the amendment under the SC/ST Act.

Police across the state have started making security arrangements in wake of bandh call given by the state unit of Bhavadas on April 2. As per reports, Bhavadas will stage a protest against the amendment under the SC/ST Act.

Meanwhile, Chief Minister of Punjab Captain Amarinder Singh has appealed to protesters to ensure that mortal remains of the victims, that are expected to arrive in Amritsar tomorrow from Iraq, are allowed to be transported to their native villages without any impediment.

A heavy police force has been deployed at various sensitive points of the city and in the district.  As per reports by ANI, the government has also appointed special executive magistrates for the maintenance of law and order, up to April 3, in their respective districts under Section 21 of the CrPC. The apex court had on March 20 diluted the provisions of the Act, in a bid to protect honest public servants discharging bona fide duties from being blackmailed with false cases under the Act.

(The above story first appeared on LatestLY on Apr 01, 2018 06:58 PM IST. For more news and updates on politics, world, sports, entertainment and lifestyle, log on to our website latestly.com).