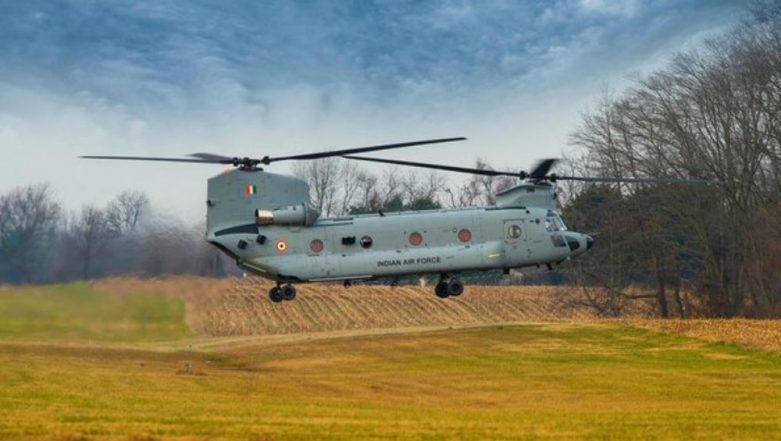 New Delhi, March 25: The Indian Air Force (IAF) on Monday will induct the first unit of four CH-47F Chinook helicopters in its fleet in Chandigarh. With this, the Chinook helicopters will become a part of the 126 Helicopter Flight, which currently operates the last of the Mi-26 heavy lift choppers. The Chinook heavy-lift helicopters had arrived in India from the United States of America (USA) on February 10 this year. The multi-mission helicopters, which have been deployed in Chandigarh, will be used for transports artillery, troops, equipment, supplies to the battlefield. Air Chief Marshal B.S. Dhanoa will induct the first unit of four Chinook heavy-lift helicopters today. India's Air Fleet Too Vintage? IAF Has Lost 7 Warplanes Till Now in 2019.

The first four CH-47F Chinooks for the IAF were brought to the Mundra Port in Gujarat in February. These helicopters were assembled in Gujarat and were then taken to Chandigarh. “The CH-47F (I) Chinook is an advanced multi-mission helicopter that will provide the Indian armed forces with unmatched strategic airlift capability across the full spectrum of combat and humanitarian missions. The Indian Air Force currently has 15 Chinook helicopters on order,” a statement released by Boeing noted.

All You Need to Know About the CH-47F Heavy-Lift Chopper:

In September 2015, India had signed a $3 billion contract for the purchase of 15 Chinook and 22 Apache attack helicopters. The Chinook CH-47F (I) will provide the IAF with unmatched strategic airlift capability across the full spectrum of combat missions.

#Chinook: CH-47F (I) Chinook is an advanced multi-mission helicopter that will provide Indian Air Force with unmatched strategic airlift capability across the full spectrum of combat & humanitarian missions.

Here's All You Need to Know About the Chinook Helicopters:

The induction of the helicopters in the IAF fleet will boost India’s capabilities for  quick mobilisation of troops in higher reaches along the Line of Control (LoC). The Chinook helicopters are being used by Armed Forces in 19 countries.