Voting for the Punjab Assembly elections will no longer be held on February 14. Rather, its date has been changed by the Election Commission to 20 February. 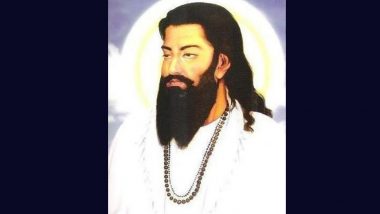 Voting for the Punjab Assembly elections will no longer be held on February 14. The polling date has been changed by the Election Commission to February 20. Almost all the parties from Punjab had urged the commission because 16th February is the birth anniversary of Sant Ravidas and this day means a lot to a section in Punjab called 'Ravidasiya community'. Now the question may be as to why the 'Ravidassia Community' is so important in Punjab that the date of elections had to be changed.  Punjab Assembly Elections 2022: Punjab Polls Date Postpones to February 20

As the name suggests, Ravidassia Community is a group associated with Sant Ravidas. The Ravidassia community believes in the sect which was propagated by Guru Ravidas of the Sikhs. This cult came into existence during the British rule over India in the 20th century. But after Independence, it continued to prosper.

In this community, Guru Ravidas is called 'Satguru' and the current Dera chiefs are called 'Guru' and those who follow the sect are called 'Bhagat'. Earlier this community considered the Sikh scripture Guru Granth Sahib as its holy symbol. But in 2009, there was a deadly attack on the then Ravidassia Guru Sant Niranjan Das and his Naib Sant Ramanand Das in the Austrian capital Vienna. It is said that this attack was carried out by Sikh terrorists, in which Sant Ramanand Das died. After this, the sect got separated from the Sikhs.

Why did political parties insist on Postponing elections?

The answer lies in two parts. First, the largest hideout of the Ravidasiya community, 'Dera Sachkhand Ballan', is headquartered in Jalandhar, Punjab. The head of this dera is the same Guru Niranjan Das, who parted ways with the Sikhs after the 2009 attack in Vienna. The second aspect is that not only in Punjab, but in most places, the majority of members of the Ravidassiya community belong to the Scheduled Castes (SC). And according to the 2011 census, about 32% of the population in Punjab is of SC i.e. Dalits. Out of this, the number of supporters of 'Dera Sachkhand Ballan' alone is said to be a little more than 15 lakh.

A recent report in The Pioneer quoted the report of the Union Ministry of Social Justice and Empowerment that there are 39 sub-classes in Punjab Dalits (SC). There are also 5 sub-classes in which 80% of the Dalit population (SC Population) comes. Among these 5 sub-classes, 30% are Ravidassia, the second largest after religious Sikhs, close to 24%. Most of the Ravidassia are found in the Doaba region of Punjab. Districts like Jalandhar, Hoshiarpur, Nawanshahr, Kapurthala come in this region.  Punjab Assembly Elections 2022: Who is Bhagwant Mann, AAP’s CM Face For The Upcoming Polls

Now it comes to the election date, which was earlier February 14. There may be a question in this that the birth anniversary of Guru Ravidas is on 16 February. Then why the problem? The answer is that the Ravidassiya community celebrates the birth anniversary of its 'Satguru' for seven days with full pomp. The biggest event is held at the birthplace of Guru Ravidas in Varanasi. For this, a full train reaches Varanasi from Dera Sachkhand Ballan in Jalandhar. This time the duration of the event is seven days between February 10 and 16. During this period, up to 80 percent of the Ravidasi community lives outside Punjab, which would have an effect on voting. That is why the Election Commission also thought it appropriate to change the date of voting in Punjab.

(The above story first appeared on LatestLY on Jan 19, 2022 03:57 PM IST. For more news and updates on politics, world, sports, entertainment and lifestyle, log on to our website latestly.com).