Republic Day 2023 FAQs: Who Will Be the Chief Guest? When Is Flag Hoisting? When Does R-Day Parade Start? Know Everything Here

This year, the main attraction for the viewers will be the Republic Day Parade along the redeveloped Rajpath - now Kartavyapath - near India Gate where the country's military might, culture, and diversity would be on full display. 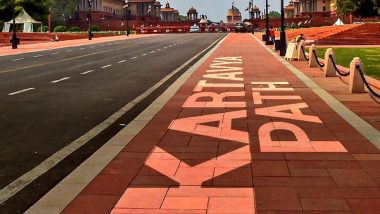 Mumbai, January 18: The celebrations for this year’s Republic Day are set to take place on Thursday, January 26 - the day the Constitution of India came into force in 1950. January 26 marks the adoption of the Constitution in 1950 India truly became a democratic republic. On this proud moment, the President of India unfurls the National Flag and starts the ceremony on the 74th Republic Day.

This year, the main attraction for the viewers will be the Republic Day Parade along the redeveloped Rajpath - now Kartavyapath - near India Gate where the country's military might, culture, and diversity would be on full display. However, this year the seating plans on Kartavya Path changed with the number of seats being reduced to 45,000. Republic Day Parade 2023: 50 Aircraft to Take Part in R-Day Celebrations at Kartavya Path, Says Indian Air Force.

Republic Day 2023: Know The Time Of Flag Hoisting And Parade & Who Will Be The Chief Guest

The Defence Ministry further added that the Shramyogis who worked to build the Central Vista and new Parliament building and vegetable vendors and milk booth vendors will be special invitees for the Republic Day parade. They would be seated in the front of the main dias, at the R-Day parade.

This time on the occasion of Republic Day 2023, Egypt President Abdel Fattah El-Sisi will be the chief guest of India as both countries celebrate the 75th anniversary of their diplomatic relations. Republic Day Parade 2023: Ayodhya's Deepotsav Will Be Seen on Uttar Pradesh's R-Day Tableau.

When Is Flag Hoisting?

The flag hoisting event on the Republic Day 2023 is set to take place at 8 am. The parade will then begin at 9:30 am. As usual Prime Minister Narendra Modi will visit the Amar Jawan Jyoti. Later, President Droupadi Murmu will unfurl the national flag.

When Does R-Day Parade Start?

The Republic Day parade will start at the scheduled time of 10 am. The parade marches from the Rashtrapati Bhawan along the Rajpath, to India Gate and from there to Red Fort.

The national festival fills every Indian with patriotism and enthusiasm to do something for the country. From Colourful theme-based tableaus of different states that highlight every state's culture and significance, this year, the parade will be a spectacular show.

(The above story first appeared on LatestLY on Jan 18, 2023 04:23 PM IST. For more news and updates on politics, world, sports, entertainment and lifestyle, log on to our website latestly.com).