Union Minister Hardeep Singh Puri Stuck in Traffic jam in Delhi; Hopped on to Metro to Reach Airport on Time

Union Minister Hardeep Singh Puri had to take a metro to reach the airport on time. 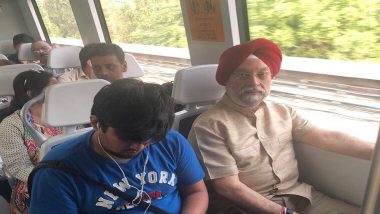 New Delhi, May 22: The traffic problem in the national capital Delhi is deteriorating day by day. The latest victim of the long traffic jams is Union Minister Hardeep Singh Puri. The union minister had to take a metro to reach the airport on time. The Minister of State for Urban Affairs was stuck near Dhaula Kuan.

Puri tweeted his photo on the train. The former diplomat called the metro ‘a world-class asset. He even gave a five-star rating to the metro.

While on my way to the airport this morning I found myself stuck in the midst of a huge traffic jam near Dhaula Kuan.

Choice was to either miss the flight or hop on to the #Metro; so that’s what I did.

Last week, the union minister had also advised the Delhi Metro to offer special or discounted fares for students and senior citizens, so that the burden of fare hike could be reduced. In 2017, the Metro fares were hiked up by 100 percent. The union minister has always encouraged people to use public transport to help in reducing long traffic jams in the city.

(The above story first appeared on LatestLY on May 22, 2018 06:53 PM IST. For more news and updates on politics, world, sports, entertainment and lifestyle, log on to our website latestly.com).