Former Punjab Congress chief Navjot Singh Sidhu on Friday surrendered before a court in his hometown Patiala in Punjab in a 1988 road rage case in which the Supreme Court enhanced his punishment to a year's rigorous imprisonment over the death of a 65-year-old man. 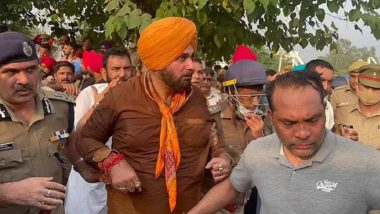 Chandigarh, May 20: Former Punjab Congress chief Navjot Singh Sidhu on Friday surrendered before a court in his hometown Patiala in Punjab in a 1988 road rage case in which the Supreme Court enhanced his punishment to a year's rigorous imprisonment over the death of a 65-year-old man.

Earlier in the day, Sidhu requested the apex court to grant him a few more weeks to surrender, citing health grounds. Navjot Sidhu Sentenced To One Year In Jail In 1988 Road Rage Case By Supreme Court

Senior advocate A.M. Singhvi, appearing for Sidhu, requested to mention the matter before the court but it declined permission, asking Sidhu to give a letter, requesting more time to surrender to the registry. "Can't mention like this," it said.

In Patiala, a few party leaders reached his residence before his surrender to extend moral support to Sidhu, 58, a former legislator from Amritsar East and a three-time Amritsar MP from the BJP.  Navjot Singh Sidhu Road Rage Case: Congress Leader Seeks Time in Supreme Court To Surrender

Sidhu surrendered in the court of Chief Judicial Magistrate Amit Malhan. After a medical check-up, the former cricketer-turned-politician was lodged in the Patiala Central Jail.

Sidhu has been lodged in an ordinary barrack as the AAP government in Punjab last week decided to junk special cells in jails for VIP prisoners.

Interestingly, Bikram Singh Majithia, one of the most powerful Shiromani Akali Dal (SAD) leaders, is in judicial custody in the same jail where Sidhu has been lodged.

Both Sidhu and Majithia, who is facing charges in a drugs case, were once close friends but are now political enemies.

They were in fray from Amritsar East in the recently-held Assembly polls and the seat witnessed a bitter battle. They faced defeat from AAP's greenhorn Jeevan Jyot Kaur.

With the apex court imposing the imprisonment, Sidhu said he "will submit to the majesty of law".

"Will submit to the majesty of law...," Sidhu, who is not averse to even sharp criticism of his own party and its policies and leaders, said in a tweet on Thursday.

The judgment came when Sidhu, riding on an elephant, was staging a protest, along with party workers, against price rise in Patiala where the incident of road rage was reported in 1988.

The apex court, which reserved the judgment in March, overturned its 2018 judgment, which had reduced the punishment for Sidhu in the case, after a review petition was filed by the family of Gurnam Singh, who had died in the incident.

Police said Sidhu fled from the scene after committing the crime. Gurnam Singh was taken to a hospital where he was declared dead.

Sidhu said Gurnam Singh died of a cardiac arrest and not because he was punched in the head.

Sidhu was acquitted of the murder charges by a trial court in September 1999. However, the Punjab High Court reversed the verdict and held Sidhu and his co-accused guilty of culpable homicide not amounting to murder in December 2006. It sentenced them to three years in jail and imposed a fine of Rs 1 lakh each.

Both Sidhu and Sandhu filed an appeal in the Supreme Court, which stayed their conviction in 2007.

In 2018, the Supreme Court acquitted him of culpable homicide and convicted him of causing hurt in a road rage case in which one person died.

(The above story first appeared on LatestLY on May 20, 2022 05:52 PM IST. For more news and updates on politics, world, sports, entertainment and lifestyle, log on to our website latestly.com).