In 2021, the Centre increased the DA of all its employees twice; first in July and then in October. 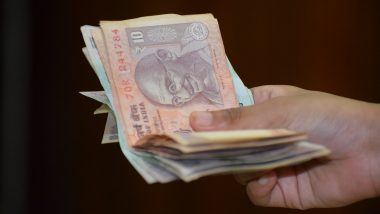 Mumbai, March 11: After sweeping four of the five-poll bound states in the recently concluded Assembly Elections, the Narendra Modi-led BJP Government at the Centre may give a Holi gift to its employees. As per reports, the Central Government is planning to increase the Dearness Allowance (DA) of its employees by 3 percent as the latest add-on to the 7th Pay Commission.

The decision to increase the DA is set to be taken during the cabinet meeting to be held on March 16. According to sources, if the cabinet reaches an agreement, then the DA will be increased from 31 percent to 34 percent. At present, the Dearness Allowance that is given to government employees stands at 31 percent. It must be noted that the DA is given for the government to improve their standing of living and to cope with the ever-increasing prices. 7th Pay Commission: Good News Regarding DA, DR Arrears Likely Soon, PM Narendra Modi to Take Final Call.

The cabinet meeting decision on March 16 will prove to be beneficial for more than 50 lakh government employees and over 65 lakh pensioners. As per the recommendations of the 7th Pay Commission, the Central government calculates DA on the basic salary of its employees.

An increase of 3 percent from 31 percent to 34 percent will help to increase the salary of government employees up to a minimum of Rs 6,480 and a maximum cap of Rs 20,000.

A timeline of Dearness Allowance (DA):

It will be interesting to see what decision the Centre takes as the Election Commission of India (ECI) has removed the model code of conduct after the Assembly Election results of the five states.

(The above story first appeared on LatestLY on Mar 11, 2022 12:04 PM IST. For more news and updates on politics, world, sports, entertainment and lifestyle, log on to our website latestly.com).