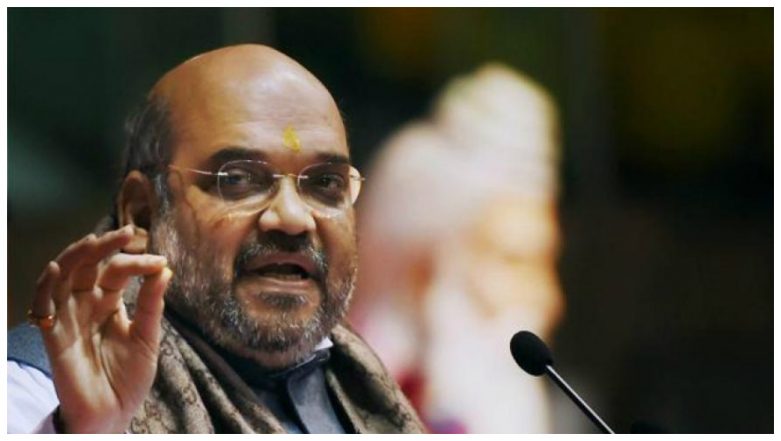 New Delhi, May 17: Bharatiya Janata Party (BJP) president Amit Shah on Friday distanced himself from party leaders statement on Nathuram Godse. The BJP chief said that statement of Anantkumar Hegde, Pragya Thakur and Nalin Kateel are their personal opinion. Shah said that the party has taken their statements seriously and the disciplinary committee will seek an explanation from all the three leaders and submit the report to the party within in 10 days. Nathuram Godse 'Patriot' Row: Anantkumar Hegde Defends Mahatma Gandhi's Assassin on Twitter, Later Claims 'Account Hacked'.

"Statements of Ananthkumar Hegde, Pragya Thakur and Nalin Kateel are their personal opinion, BJP has nothing to do with it. They have withdrawn their statements and apologized. BJP has taken their statements seriously and sent these statements to the disciplinary committee. The disciplinary committee will seek an explanation from all the three leaders and will submit the report to the party within 10 days," Shah said. 'Godse Killed 1, Kasab Killed 72, Rajiv Gandhi Killed 17,000': BJP MP Nalin Kumar Kateel Stokes Row.

BJP President Amit Shah: The disciplinary committee will seek explanation from all the three leaders and will submit the report to the party within 10 days https://t.co/oQ8FyQsgSq

Kateel, a BJP MP from Karnataka, compared Nathuram Godse with former Prime Minister Rajiv Gandhi, who has been the primary target of the saffron party in the national poll campaign nearly 30 years after his death. Union Minister Anantkumar Hegde, tweeted "seven decades later, the condemned were being heard". Both the tweets are deleted from Twitter now. Hegde claimed that his Twitter handle had been breached.  Pragya Singh Thakur Calls Nathuram Godse ‘Patriot’, Apologises Later and Retracts Statement.

"Godse killed one, Kasab killed 72, Rajiv Gandhi killed 17,000. You judge who is more cruel in this??" - Nalin Kateel tweeted on Thursday, after Pragya Thakur said Godse was a patriot and will be one. Following him, Hegde tweeted: "Am glad that 7 decades later today's generation debates in a changed perceptional environment and gives good scope for the condemned to be heard upon. #NathuramGodse would have finally felt happy with this debate!"

An hour later, he deleted the tweet and said, "My Twitter account has been breached twice in the past one week and certain tweets have been posted on my timeline which has been discarded and deleted. Regret the posts attributed to me."

The controversy was started by Makkal Needhi Maiam chief Kamal Haasan who said that "independent India's first extremist was a Hindu", referring to Godse, who assassinated Mahatma Gandhi. The actor-turned-politician later said that he stands by his comments and he only repeated what was in history.