In a major setback to Asaram Bapu, who is undergoing life imprisonment for raping the minor, the Supreme Court today dismissed his plea seeking temporary suspension of sentence. 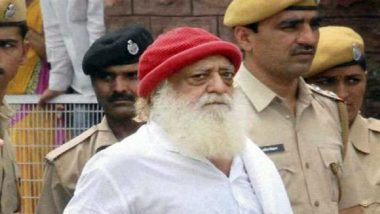 Alleging that Asaram was not getting proper ayurvedic treatment in jail, his counsel R Basant told the apex court that his client was only asking for an interim bail for two months. "Mercy is all that I'm asking for," said senior advocate Basant. The father of the child rape victim had opposed Asaram's bail plea, apprehending that his daughter and his family could be killed if he was released on bail.

"10 eyewitnesses have been attacked and 3 of them died and in all likelihood the petitioner, if granted bail, will organise revenge killing of the child rape victim and her family and of the rape victim and eyewitnesses pending at Surat, Gujarat," he had added. The Rajasthan government had also opposed his bail, stating that he wants to change the place of his custody under the guise of seeking medical treatment.

(The above story first appeared on LatestLY on Aug 31, 2021 04:55 PM IST. For more news and updates on politics, world, sports, entertainment and lifestyle, log on to our website latestly.com).