Reportedly, landslides, heavy downpours, and waterlogging have resulted in huge damage to the state infrastructure such as railway tracks, bridges, and roads. 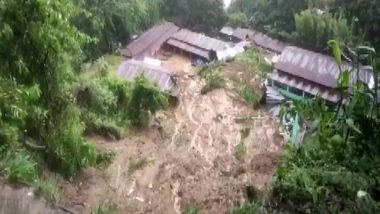 Guwahati, May 17: For the past few days, normal life has taken a hit as flash floods and landslides, triggered by heavy rainfall have lashed Assam. Lakhs of people in the region have been affected due to extreme weather conditions. According to ANI, 3 people, including a child from the Cachar district, are missing since Sunday, while earlier on Saturday, three people, including a woman, were reported dead in landslides in the Haflong of the Dima Hasao district.

Reportedly, landslides, heavy downpours, and waterlogging have resulted in huge damage to the state infrastructure such as railway tracks, bridges, and roads. A major bridge in the Dima Hasao district was washed away and road and rail links were cut off as heavy rain and flooding with landslides continued in the region. According to local media reports, Dima Hasao district has been completely cut off due to landslides and a breakdown of communication channels, adding that all roads and railways leading to Haflong have been blocked since May 15. Assam Floods: Flood Situation Worsens in Bherbheri Area, Rescue Operations Underway (Watch Video).

(The above story first appeared on LatestLY on May 17, 2022 03:51 PM IST. For more news and updates on politics, world, sports, entertainment and lifestyle, log on to our website latestly.com).