In a shocking incident, bank account of two children in Uttar Bihar Gramin Bank were credited with over Rs 900 crore in Katihar district of Bihar. The senior officials of the bank have ordered probe in the matter. 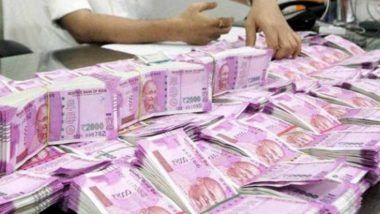 Patna, September 16: In a case of unexpected windfall gain, two school children in Bihar's Katihar received a sum of more than Rs 900 crores in their bank accounts collectively. This sudden credit in their account left everyone, the children, their families as well as the bank officials, puzzled. It was accentuated when the boys, identified as Guruchandra Vishwas and Asit Kumar, went to the bank to check the amount deposited by the state government for their school uniforms. Reports inform that the senior bank officials have ordered a probe in the matter. 'PM Narendra Modi Sent Me Money' Claims Bihar Man After He Erroneously Receives Rs 5.5 Lakh in His Bank Account.

Reports inform that the children, both resident of Pastiya village in Bagaura panchayat in Katihar district, went to find out about the money deposited by the state government in their bank account for school uniforms at the local Centralised Precessing Centre (CPC) of State Bank of India (SBI). However, to their surprise, the duo discovered enormous amounts of money in their accounts at Uttar Bihar Gramin Bank. Vishwas' account showed a balance of Rs 60 crore and Kumar's account had Rs 900 crore, according to reports. Madhya Pradesh: Farmer Digs Out Diamond Worth Rs 60 Lakh From a Leased Land.

In a similar incident was reported from Bihar's Khagaria district a few days ago. The account of the man, identified as Ranjit Das, a native of Bakhtiyarpur village, at the Gramin Bank was credited with Rs 5.5 lakh erroneously by the bank. However, the man refused to return the money and claimed that Prime Minister Narendra Modi had send him the amount. Das has reportedly been arrested by the police on the complaint of bank manager and a probe is underway.

(The above story first appeared on LatestLY on Sep 16, 2021 01:44 PM IST. For more news and updates on politics, world, sports, entertainment and lifestyle, log on to our website latestly.com).