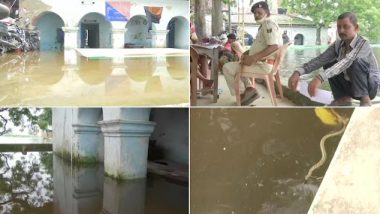 Patna, July 28: The flood situation in parts of Bihar continued to remain grim with over 15 lakh people affected in 11 districts of the state. On Tuesday, the Kushewarsthan Police station in Darbhanga district was flooded following incessant rainfall in the region. According to a tweet by ANI, snakes were seen floating in the water at the Police station. Several parts of Darbhanga district reeled under severe flood conditions, causing inconvenience to residents. The locals informed that the entire area was submerged in flood water as the flow of the water is constantly increasing. Bihar Floods: 19 NDRF Teams Deployed, Scores Rehabilitated as Heavy Rainfall in Nepal Swells Gandak and Kosi Rivers.

According to a report by ANI, several villagers said that the rising water levels are a major cause for worry, adding that they have not received any aid from the administration as well. Major rivers including the Ganga, Bagmati, Budhi, Gandak, Kamala Balan, Mahananda and Ghaghra have been flowing above the danger mark in many areas. In the wake of the flood situation in the state, as many as 22 teams of the National Disaster Response Force (NDRF) and the State Disaster Response Force (SDRF) have been deployed to help in rescue and relief efforts. Floods In India: 2.4 Million Children Affected By Recent Flood Fury, Says UNICEF.

Disaster management additional secretary Ramchandra Doo claimed that as many as 14,011 people are staying in 26 relief camps and as many as 463 community kitchens are being run in the flood-affected areas. The official added that nearly 1,36,464 people have been evacuated from the affected areas by NDRF, SDRF with the help of boats.

(The above story first appeared on LatestLY on Jul 28, 2020 11:21 AM IST. For more news and updates on politics, world, sports, entertainment and lifestyle, log on to our website latestly.com).