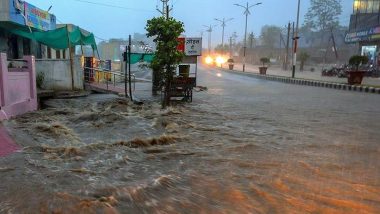 Patna, October 1: Death toll in the Indian state of Bihar has jumped to 40 as more bodies have been recovered by relief workers deployed in the calamity-hit region. The fatality count is feared to rise further as several parts of Bihar, including state capital Patna, are still under deluge. Chief Minister Nitish Kumar spoke with Prime Minister Narendra Modi, seeking additional assistance from  the Centre to expedite the relief and rescue operations.

Overall, the death toll across North India due to the recent spate of rainfall has crossed the 150-mark. The fatalities were counted since Friday, when the final spell of Monsoon hit the region. Considering the humanitarian catastrophe, the United Nations Secretary-General Antonio Guterres has offered all possible aide to the Indian government. 'Hathiya Nakshatra' Rains Responsible For Bihar Floods, Says Ashwini Kumar Choubey; What is 'Hathiya Nakshatra'?

"The Secretary-General is saddened by the loss of life, displacement of people and destruction of property due to monsoon rains and associated flooding in India. He extends his condolences and solidarity to the families of the victims and Government of India," said the statement issued by the Spokesperson of the UN chief.

"The United Nations stands ready to work with the authorities as they respond to the humanitarian needs resulting from this ongoing monsoon season," he further added.

The weather department has forecast a long delayed withdrawal of Monsoon and more rains for Bihar, including capital Patna where several areas still remain submerged, and food and relief material are being air dropped.

India recorded its highest rainfall this Monsoon since 1994, the India Meteorological Department (IMD) said classifying it 'above normal' as the season officially ended on Monday. However, rain bearing winds still remain active over several parts of the country.

Of the 36 meteorological subdivisions of the IMD, two -- west Madhya Pradesh and Saurashtra and Kutch -- recorded precipitation in "large excess".

In Patna, normal life was thrown out of gear, with several schools shut, roads inundated, and many shops, hospitals and houses submerged in knee deep waters.

Deputy Chief Minister Sushil Kumar Modi was "rescued" by a State Disaster Response Force (SDRF) boat. Union Minister Ram Vilas Paswan and his lawmaker-son Chirag Paswan are putting up at a hotel instead of their house in a posh locality of the Bihar capital.

(The above story first appeared on LatestLY on Oct 01, 2019 11:19 AM IST. For more news and updates on politics, world, sports, entertainment and lifestyle, log on to our website latestly.com).