Wildlife activists in Vadodara on August 15 organised a condolence meet at ghats of the Vishwamitri river to condole the death of a crocodile. 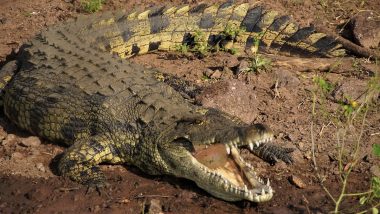 Vadodara, August 17: Wildlife activists in Vadodara on August 15 organised a condolence meet at ghats of the Vishwamitri river to condole the death of a crocodile. A week ago, the 10-foot-long crocodile was found in the Vishwamitri river. It was the fourth crocodile to have died in the river within two months. The condolence meet was attended by dozens of animal lovers and residents of Vadodara. Vadodara: Massive 12-Feet-Long Crocodile Rescued From Raval Village, Watch Viral Video.

Wildlife activist Vishal Thakur, along with Sanjay Soni, organized the condolence meet for the crocodile. The venue had a photograph of the reptile and the attendees paid floral tributes, according to a report by Times of India. "He was like a member of our family and stayed among us for so many years. We had spotted him many times during our visit to the river. His sudden death pained us and so we decided to pay tribute to the reptile," Thakur was quoted as saying. Crocodile in Vadodara! Six-Feet Long Reptile Rescued from Narmada Canal, Forest Officials Take Croc on Bike (Watch Video).

The crocodile, weighing about 150 kg, was found dead on August 10. The carcass was floating in the river in Sayajigunj. The forest department is probing the the death of four crocodiles. The cause of their death is not clear yet. Asked why he organised the condolence meet for the crocodile, Thakur said he wanted to draw attention of citizens towards the river and crocodiles.

"If any Asiatic lion dies in Gir forest, villagers express grief as they are attached to the big cats. Barodians have been co-existing with crocodiles for many decades but how many really care for these reptiles? In fact, many litter the river with garbage. We organized this meet to involve citizens in conserving the river and the reptiles," he said.

In a bid to create awareness about the crocodiles, Thakur and Soni have planned to launch a campaign in schools and colleges.

(The above story first appeared on LatestLY on Aug 17, 2021 01:28 PM IST. For more news and updates on politics, world, sports, entertainment and lifestyle, log on to our website latestly.com).